Ah, the rythms of writing and publishing.  It is its own kind of ebb and flow.  I submitted the following review for a mid August deadline in Musicworks magazine.  I was excited by the opportunity to write about a new topic for me…experimental music and I threw myself headlong into the exhausting opportunity, not to mention the challenge of trying to cover an event that spanned ten days and 53 artists.  Now that it is published, I get to share it with you too. 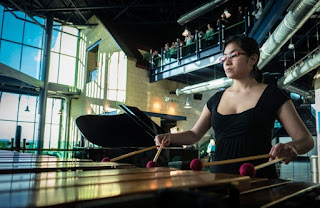 Although this year marked the 19th iteration of the biennial Sound Symposium, it was distinguished by several firsts such as colloquium, new awards, and of course–risk taking world premieres. The Symposium commenced with the Indigenous Improvisation Colloquium: Freedom and Responsibility–and heritage, ceremony and cultural ontology quickly became themes that threaded throughout the ten following days of performance.  Raven Chacon, who is a member of the American Indian arts collective Postcommodity, situated improvisation as a “safe place” for marginalized cultures. Meanwhile, Dawn Avery and Cris Derksen–both outstanding and innovative cellists–added First Nations voices that challenged simple categories.  Featured artists from Norway, Frode Fjellheim and Snorre Bjerck, expanded the scope of discussion to include the resurgence of the Sami vocal tradition of yoiking.  These themes, which probe the symbiotic relationship between place and identity, have a special resonance in the cultural psyche of Newfoundland and Labrador.

With ten international and forty-three Canadians artists creating sonic adventures in concert halls, cathedrals, galleries, pubs and the unforgettable Harbour Symphonies it is difficult to convey a cohesive review in a few words.  Performances went from dawn to dawn.  I have to admit I didn’t make the 4:30 a.m. organ and voice performance (David Buley) in the Anglican Cathedral, although I know from previous experience that the 4-manual Casavant organ is a treat.  One of the advantages of having afternoon, evening, late night concerts and even later night jam sessions was that there were multiple opportunities and impromptu contexts in which to absorb the many talents singly and together. If you didn’t make Subhira Quartet’s set in the formal concert hall, you could pick up their pub feature of Chilean infused world music. How often do you get to hear a guzheng and didgeridoo throwing down dance tunes?

Concerts were interspersed with events from sunrise meditation (Rosalind MacPhail), mindful sound walks and gatherings (Gayle Young and James Harley), to technical workshops on composition, instrument building and graphical scores. The screening of Sonic Divide (Payton MacDonald) gave audiences an in-depth appreciation of the training, inspiration and interpretation of MacDonald’s unique approach to using his mountain bike along with  found materials as percussion instruments. 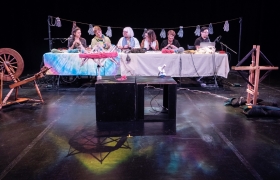 The evening that MacDonald played live, he was on a concert program that included Rokkur and NL knitters and storytellers, and Doron Sadja.  That meant the audience was taken on an odyssey that went from pure acoustics –think bicycle wheels, spinning wheels and wool winders– to synthesizers, extreme frequencies and dense noise.  This is ambitious programming that requires an audience to really open its mind and ears.  As the week unfolded it was rewarding to see both audience and artists grow to accommodate each other.

The ambient Cinquanta (Jordan Nobles) played by percussionists, guitarists, keyboard and harp situated on the different floors of the open atrium of The Rooms charmed audience members.  They actively listened not by passively sitting but by walking through the environment, almost as an act of collaboration. Nobles’ composition was ideally suited to the soaring vistas of sky and sea on view through the expansive windows.

A few hours later we figuratively transported to cliffs and ice flows. Roarshack, the impressive NL team of Paul Bendenza, Rob Power and Andrew Staniland, aptly performed Birds & Ice Report.  This composition is an artistic retrospective from Sound Symposium 1983 conceived by visual artist Frank Lapointe and the late percussionist-composer Don Wherry.  It is delicate without being precious and is a rare instance where neither image nor sound overwhelm each other. Photographer Greg Locke designed and digitalized Lapointe’s original images for this 2018 version.

Throughout the Symposium, the strength of women composers was evident.  Adding to the well recognized Hildegard Westerkamp and Gayle Young, we were introduced to powerhouse players like Cris Derksen; Dawn Avery, who performed from her North American Indian Cello Project; Jennifer Thiessen (viola d’amore) and Ida Toninato (baritone sax) who as a duo admirably build performances based on their contrasting instruments; and improvisers Susan Alcorn (pedal steel guitar) and Amy Brandon (acoustic guitar and electronics) who combined their and the audiences’ energy. 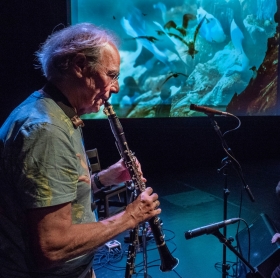 The Sound Symposium has been a consistent creative pressure cooker for decades.  This 19th event, with its sense of adventure and community, could not be dampened even by Hurricane Chris that was reduced to a post-tropical storm and one more contributor to the St. John’s soundscape.