The Competition for Retrospectives

Back in September I opened the retrospective exhibition of Alexandra McCurdy at the Burlington Art Centre.  From exhibition proposal to opening was about two years of curatorial work.  During that time I became aware of an impending crunch caused by the greying of our crafts community – there's going to be a lot of artists and senior craftspeople competing for available spots to show their retrospectives.  Right now I am working on an essay that will be published for Ann Roberts retrospective at the Clay & Glass Gallery in Waterloo early in 2012.  Our other Ann - Ann Mortimer, I believe, will have a retro soon at the Burlington.  Kai Chan, from the fiber world, just celebrated with a 3 venue retrospective in Ontario of his work.  You get the idea. 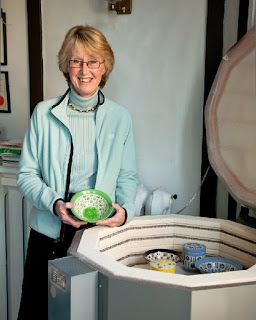 Working on Alex's retrospective I formed the opinion that in order to be valid a retrospective had to do more than summarize a career.  I know as a writer I was NOT interested in repeating myself nor did I expect someone to want to see work they'd previously seen  The onus on me was to find a new interpretation and a new way of presenting the work as well.  Luckily, Alex's common thread (pardon the pun) in much of her career was textiles and feminism.  Her career spans 40 years and feminism has changed a great deal during that time and has roughly paralleled her career shifts but no one had pointed that out before.  I also realized that much of the criticism that has been levelled at Alex could be appropriately addressed through her connection to textiles.  She was never a potter's potter but I needed to figure out why.  The other element that I brought forward was her relationship with formalist painting.  Alex had divided her work (in conversation) as "with content" and "without content".  But it hit me like a ton of bricks when I looked up at a Hurtubise print in their guest room that that was the link to the "without content" work.  She agreed.  In terms of display, I wanted to show her early textile work alongside the pots.  And that was very satisfying for all concerned.
Posted by gloria at 15:26 No comments:

Email ThisBlogThis!Share to TwitterShare to FacebookShare to Pinterest
Labels: Alexandra McCurdy in her studio with a bowl with melted beach glass. 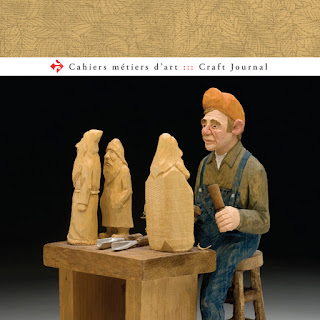 This was published earlier this year but I wanted to point it out.  The article is about the use of the human figure in contemporary craft.  It started out to be exclusively about Newfoundland craft but I came to realize that in speaking to a national audience I would have greater success if I contextualized our art and craft nationally.  I would secure a greater readership and probably do our community here a greater service both in terms of the theoretical understanding and the promotional aspects.  If I had to summarize the article I would say that clay is often seen as a stand-in for  human flesh or the body - think of the creation of Adam from clay- and textiles is our second skin, that which separates us or mediates between us and society.  Craft media allow makers who are interesting in exploring the human condition a metaphoric advantage over painters and sculptors in stone.
I first noticed the trend towards the human figure in 2007 while visiting the Craft Council Gallery's Celebrate Craft show, which I reviewed for the Visual Arts Nova Scotia.  Later on I was able to build on that insight with an artists panel that included J.C. Bear, Reed Weir, Janet Peter, Isabella St. John and Kevin Coates.  I also wrote a lead story called Figuring Us Out about these particular makers for Studio magazine –that's when I realized how much intellectual meat there was in the theme.  So, it became important for me to write about it for an academic audience and do some disciplined thinking about.  That required a research grant.  What is worth noting about all of this is that it demonstrated for me how to develop a project or theme.  Keep it growing.
Here's a link to the Craft Journal, which is bilingual as reflected in their title.
http://www.craftjournal.ca/
Posted by gloria at 08:11 No comments: