Tuckamore 2016 ends with a flourish! 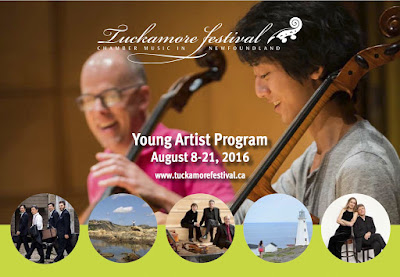 Last night, August 21, 2016 the 16th Tuckamore Festival concluded with a splendid finale featuring this year's crop of young talent.   The Festival regularly features world-class quartets like the Shanghai Quartet, which (I believe it was) the New York Times described in glowing terms like "exquisite".  And so St. John'a audiences go into the concert hall brimming with expectations of excellence and are not disappointed.  Can you imagine how intimidating that must be for those Young Artists who take the stage for largely the same audience in the same week?  Talk about a tough act to follow from the 19th: the Shanghai Quartet, Duo Concertante with Vernon Regehr in a Schubert Extravaganza!.

The two weeks leading up to the finale must be something of a pressure-cooker for the young musicians participating in the masterclasses and mentorship program.  Listening to the six performances last night, you would never guess that these quartets and trios were newly minted ensembles.  The timing, the cueing, the balance of instruments was there.  My hat also goes off to the artistic directors, Nancy Dahn and Timothy Steeves for their crafting of these ensembles.  It takes insight in how to match skill levels, musicianship and then the all-important programming.  The diverse selections of music by Dvorak, Mendelssohn, Brahms, and Beethoven made for a pleasurable evening of musical experience that ended on a highpoint with a flourish of Fauré.
Posted by gloria at 05:23 2 comments:

How to Charm an Audience: Suzie LeBlanc and/or The Gryphon Trio 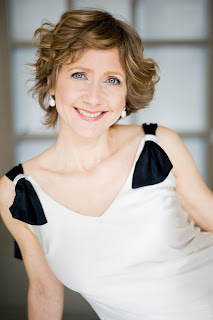 The second week of the musical marathon that is the Tuckamore Festival is upon us.  But before week one fades from our memories I wanted to salute the soprano talents of Suzie LeBlanc.  Whether it was for her varied programs, Music From the 45th Parallel North or the lieder the following night, she completely charmed the audience.  LeBlanc has an enthusiastic way of inhabiting the music that is infectious and pulls the audience in as if they were co-conspirators along with Robert Kortgaard on piano or her other fellow performers.  Suzie had said that in preparation for the late night concert she was selecting some of her favourite pieces to perform.  It was only after she reviewed her list did the geographic denominator of the 45th Parallel become apparent.

It could be suggested that another theme was possible–and that would be the complimentary nature of opposites.  It was there in the call and response that she coaxed the audience into, the interspecies dating of "l'alouette et poisson", the bittersweet of "si dolce, il tormento" and the American celluloid, blue-eyed doll that is alternately loved and then hated.  And what better role for music than to convey the seemingly impossible, to stretch beyond the logical and literal?  And if you can, as LeBlanc did, give us a lesson in Canada's own musical heritage from Acadia all the better.

Jamie Parker of the Gryphon Trio has a similar way of making music approachable, of knocking the stuffing out of classical music repertoire.  The audience warmed to his comments that likened Mendelssohn's Piano Trio No. 2 in C Minor, Op. 66 as to "a Mission Impossible half an hour" complete with a car chase, romantic hotel scene, a trademark quasi presto and concluding with the special effects of a Bach chorale quote that ranged from the pious to the flashy and heroic. 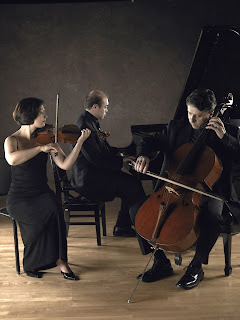 What was striking was that whether it was Debussy or the compositions of our very own Andrew Staniland the Gryphon Trio has an unusually, cohesive sound.  Never do you hear one lead instrument with a back up of two others.  Rather, it is one integrated sound.  Staniland was represented by two selections:  14 Seconds from the Dark Star Requiem and the Solstice Songs.  14 Seconds started without fanfare but became more insistent and grew more urgent.  The composer in his opening remarks told the audience that he wanted us to be left with a feeling of hope in the face of the world's disasters (the title was sparked by the statistic that at one point every 14 seconds someone had died of a HIV/AIDS).

Given the program notes that described Solstice Songs by Staniland as "lively, dance-like" the audience might have expected something pleasantly common.  Instead, we were delighted with a composition that ascended and cascaded with vigor, tumbling and at times turbulent!  How many memorable evenings can our memories accommodate?

Email ThisBlogThis!Share to TwitterShare to FacebookShare to Pinterest
Labels: Memorable Week One of Tuckamore 2016

The concerts featuring the Tuckamore Festival's Young Artists have to be one of the best values in town.  These concerts are held at the historic St. Andrew's Presbyterian Church, affectionately known as "The Kirk", which has lovely acoustics, carved interiors and original stained glass windows.  It is a perfect setting for an aesthetic experience such as the lunchtime concert series.  This Wednesday, I attended the first in the young artists series and wow did we get a whole lot of music for a suggested donation of $5!

Five musicians, from four provinces and the United States, each played.  No one in the audience knew in advance what was going to be on the musical menu.  We were just there because we knew we could count on the quality of talent and skills.  No to mention, it is exciting to be a part of nurturing tomorrow's classical musicians. Afterwards, I asked several people in the audience what their favourite pieces or performers were and everyone picked differently.

One woman said that she favoured Jade Ley's lyrical interpretation of Chopin's Fantasie-Impromptu.  Another was impressed by the stage presence of Nina Weber, who played Bach's Sonata for solo violin in A minor.  One gentleman pointed out that Noah Schuster on cello, who played Tchaikovsky's Variation on a Rocco Theme was the toughest act to follow while another Tchaikovsky fan thought highly of Amanda Cassano's rendition of Mélodie.  I picked Luis Ramirez and his committed performance of Prokofiev's Piano Sonata No.7 because I think it is fiendishly difficult to play well as it twists and turns between the playful, brooding and unsettling moods.

Watch for the upcoming Saturday night concert Young Artists at Play at the Suncor Energy Hall ($15/10) and more 12:30 afternoon concerts at The Kirk next week.
Posted by gloria at 08:31 5 comments:

To describe "Riches Brought" by its title would be an understatement.  The evening's program by Duo Concertante reminded me of why we so love and so need music.  It was a veritable bumper crop of enveloping emotions.  We were uplifted, engaged, soothed and satisfied.  The program was wide-ranging from Bach to Broadway (via Ira and George Gershwin) for the first half and Maples and the Stream, which comprised the second half of the evening, was soul stirring.

Earlier in the evening, the composer of Maples and the Stream, Vincent Ho, was interviewed by Andrew Staniland.  This was a rare opportunity not just to hear a composer speak about his music but an opportunity to ask questions as well.  Members of the public commented to me during intermission that they came away from the discussion with a greater appreciation of the creative process.  Ho speaks in very down to earth ways about his conceptual work that invites the public into his creative world of contemporary music.  The give and take of discussion makes a greater impact than more formal presentations. 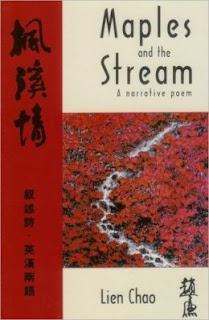 Maples and the Stream was commissioned by Duo Concertante from Vincent Ho and was first performed in Ottawa in 2013 with Evelyn Hart as narrator.  Hart brings a potent mix of narration and gesture to the stage that I would call docu-dance.  Along with the poetic text the performance on Monday night had a profound expressiveness that did not shy away from its difficult, and at times painful, topic.

Here's what Ho has said about his selection of theme and poetry:
When I discovered Lien’s poems, they immediately resonated with me. As a 2nd-generation Chinese Canadian, I knew all too well the struggles my own parents went through when they immigrated to Canada. So when it came to composing the music, I already had an experiential foundation to draw from.

Each poem depicts a scenario from differing points of Lien’s journey – beginning with her early experiences in China, to the change in the country’s political atmosphere, and finally to her arrival in Canada. My aim was to capture the emotional and cultural transition Lien had made in musical form.
Posted by gloria at 05:59 No comments: