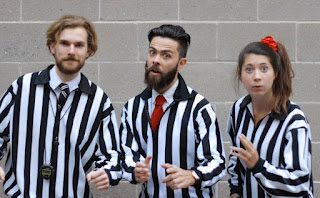 We have come together
In the spirit of loving competition,
To celebrate the Canadian Improv Games.
We promise to uphold the ideals of improvisation,
To co-operate with one another,
To learn from each other,
To commit ourselves to the moment,
And above all…
To Have A Good Time!

This weekend I was in dire need of a good, therapeutic laugh.  If Trump speeches and a bad back weren't enough, two days of snow storms had made a mess of my work schedule and for those of us who are self employed, or like my friends in the food and service industry, if you don't work you don't get paid.  So, it was clear I was going to head into the LSPU Hall to catch the Newfoundland regionals of The Canadian Improv Games.

For years I have been saying I would do this and somehow managed to miss it.  This year was particularly enticing as the veteran improv crowd would be performing at a special Alumni Show.  I am one of those people who will be probably cracking jokes on her deathbed.  It is simply in my DNA and one of my cherished survival tools.  What so appeals to me about improvisational comedy is its innate resourcefulness.  It requires little preparatory time because you cannot rehearse it.  Granted, there are plenty of warm up exercises and there are always some structural things to push against.  For example, a time limit of 3 minutes per scene and each of the events has a category like theme, life event or character.  But there are delightful wild cards where the audience madly screams out suggestions for these categories such as "style", which can be anything from Disney musical to Shakespeare or a cheesy horror film.  This is a really shrewd way of knitting together the audience and performers through interaction.

These performances are staged as competitive games.  That means that instead of a master of ceremonies you have a madcap referee.  Sometimes, there are as many as three stooges acting as whistle blowing referees whipping up the audience into a hilarious frenzy and trying to contain the antics of competing teams of players.  When you think about it, the Improv Games is a winning mix of the unpredictable and favourite, recognizable elements–like "what's in the box?".  This will be a series of gag prizes raffled off for fundraising tickets that are sold in pairs, arm's length, etc right up to "mummified".  Then there is the oath with which every session starts and all audience members rise to recite with their right hand on their hearts. Believe me, as per the referee's instructions  you never know who will reach out with their left hand for your "G-rated body part".

Putting the Love Back into Valentine's Day

I have always been struck by the commercialism of holidays such as Christmas, Easter, Halloween and of course Valentine's Day.  A few years back, I decided to try and subvert this by practicing a more conscious approach to celebrating them.  First, I started out making gifts by hand, then it grew into volunteering on these days –like when I went to The Gathering Place to socialize with the homeless or as one savvy nun put it "our guests".  On other occasions, it was supporting Trouble Bound Studio's $100 tattoo days to memorialize loved ones lost to cancer.  This past weekend they raised over $6,000 for Daffodil Place! 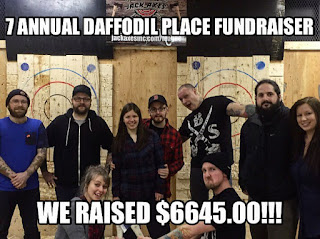 While I was waiting to go to a concert last week I was approached by a young musician who said, "you must come and hear me tomorrow!"  When I went to the ticket window I decided to buy extra tickets and pass them on to those music lovers behind me as a random act of kindness.  On Friday evening at The Yellow Belly I ended up with a drink that I had not ordered, which I passed on to a grateful student couple at the next table. 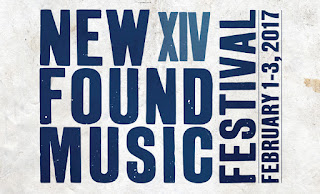 I know I will never have enough money to be a philanthropist and some days energy itself seems a scarce resource.  But these small acts seem to be a wise investment in positivity and community. And St. John's being the small city it is, where everybody seems to know everybody, I wasn't surprised to have two acquaintances chirp up in congratulations before I made it out of the restaurant.
Posted by gloria at 12:11 No comments:

Email ThisBlogThis!Share to TwitterShare to FacebookShare to Pinterest
Labels: Random Acts of Kindness

My big indulgence last week was the New Found Music Festival XIV, which was held at the Memorial University School of Music here in St. John's February 1-3, 2017.  I find it always worth my time to listen to composers and musicians speak about their creations and feel lucky when they illustrate their points by playing snippets of music.  It is a whole lot more satisfying than looking at slides of visual art.  Anyhow, it is a peek behind the scenes or inside the creative brain.

From 12:30 to 5 p.m. on Thursday I was in sessions that ranged from performances of Meng Jian to an interactive Deep Listening event.  There is no better way of learning than by doing.  And even lowly, little old me can be persuaded to sing in public. It was all rewarding but the cherry on top was Dinuk Wijeratne's Keynote Address that was really a rehearsal of Polyphonic Lively with the MUN Chamber Orchestra.

It made me smile when Dinuk told the audience that the inspiration for the piece was a painting by Paul Klee.  He said that he couldn't remember what the painting looked like or the title of the book where Wijeratne discovered the image.  It was the title that struck him.  And Dinuk likes to use the symphony as a metaphor for a community based on diversity.

Wijeratne's music has always held my attention in part because it is a fusion of east and west.  He was born in Sri Lanka and grew up in Dubai but lives and works in Canada, when he's not playing in places like Carnegie Hall.  I was surprised to learn that he had been raised on western music and that his artistic vision was largely formed in New York City and the global music scene.  Back in the dark ages when I was a teenager, I developed a taste for Ravi Shankar and classical Indian music.  Zakir Hussain was my favourite tabla player.  I was thrilled to learn that Wijeratne had had the opportunity to play with Hussain and he shared this little story with the audience.

Tabla compositions usually end on a light treble stroke (nah) but when Hussain played the piece they were rehearsing, he would end the piece on a heavy base stroke (dah).  Wijeratne noticed the sheet music still said nah.  Finally, someone in the group screwed up the courage to ask maestro Hussain about it.  Hussain studied the sheet music and then pronounced, "Well there is tradition and then there's show business".  Clearly, the emphatic dah ending was an audience-satisfying flourish.  Now, that's a lesson you can take to the bank.
Posted by gloria at 10:49 No comments: