I have a weakness for superhero films and I am a dyed-in-the-wool Marvel fan.  So, of course I had to go and see Black Panther.  Typically, I go as close to the film’s release date as possible so I can sit in the cinema with an audience of like-minded fans and share in their enthusiasm.  We are like an unofficial club and it’s very easy to separate the hardcore from the casual among us.  Who watches for the Stan Lee cameo?  Who waits until after the credits roll to catch the teaser for the next film in the sequence? –not to be confused with the previews before the film.  And then we all stand around and trade notes.

Much has been made of the Black Panther film as being “the first Black Superhero film”.  The problem with that pitch is that it’s just not true.  What about Blade in Tomb of Dracula in January 1973?  I thought it was interesting that Wesley Snipes, who played Blade, came out and said that he wanted to make Black Panther 20 years ago but was unable to for a varied of reasons.  Oh!  I forgot about Luke Cage in Hero for Hire in 1972.  And then there was Storm in 1975; many will remember Haile Berry playing her in the X-Men trilogy.

The iconic image of Black Panther crouched on the hood of a pursuing vehicle  (in the film) struck  me as downright funny.  I thought it looked like a pun on the Jaguar hood ornament…indirect product endorsement?

One of my favourite scenes in the film took place in a museum.  In it, the film’s villain comes to reclaim an artifact that originally belonged to his tribe.  I got a kick at the banter between the museum curator and villain and all the post-colonial digs.  I am not going be a spoiler and tell you how the scene ends because I want you to see it for yourself.

Oh and as for me and comic books, we go back far enough that I remember when I could spend 12 cents of weekly allowance and buy one.  I never bought Archie like the other girls.  I went for Marvel or Golden Key.  I first discovered Plato’s philosophy in Golden Key. Here’s to encouraging kids to read! 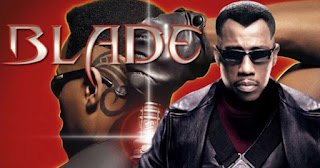 Email ThisBlogThis!Share to TwitterShare to FacebookShare to Pinterest
Labels: comic books and curators

Canada 150 From an Atlantic Perspective 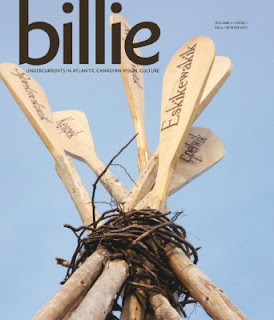 Late last week my copies of the winter 2017 issue of Billie magazine arrived in the snail mail.  This issue focuses on the Atlantic perspective on the art-related 150 celebrations of Canada’s Confederation. It is much more than a reporting of events or a string of reviews. Editor Terry Graff really pulled this one off and the result is an unusually cohesive and nuanced interpretation–well worth a read.

The cover aptly presents a close up of Alan Sylboy’s Mi’Kmaq Signposts (Our Common Woods project) and Syliboy is interviewed by Managing Editor Cheryl Bell about his entire career.  The Indigenous perspective is felt through out the issue.

I have an article in this issue about the Bonavista Biennale, which was a month-long event that stretched over 55 kilometres and 22 exhibits and countless events.  One of the difficulties of writing an overview is that you cannot possibly cover everything within your word budget.  Not to mention, that a writer worth her salt knows that you have to ferret out what is meaningful and enduring beyond the who, what, where, when and why reportage.

What I decided to pull out of the dazzling array of exhibits was the curatorial match-making of artist to site and the relationship of the local people in the rural communities to the art.  I was especially interested in the art as a form of intervention.

It was genuinely rewarding to see so much good art in nontraditional venues and to see nonart professionals taking pride and ownership as animators, interpreters and hosts.

Here is a taste of some of what I wrote:

Many of the artists were represented by two bodies of work displayed on separate sites.  Pam Hall’s…At Doran’s Meadow, a large school of cod, fashioned out of flour sacks, flew like kits against an ocean blue sky.  The textile art installation with its fish motif was effective because it was socially relevant to its site but universally accessible at the same time.  The elusive cod resource had meaning to local fishers and art lovers alike.

A few of the outdoor installations were intended to be permanent and were commissioned,…Will Gill’s metal chair, which was perched on a wave-washed rock ledge of Maberly Lookout.…domestic in reference, it is also a collaboration with the elemental forces of the ocean that provides and takes away life.  These sculptures bring up the bittersweet lifestyle of “around the bay” that is characterized by beauty and vulnerability.

Catherine Blackburn’s indigenous stitched art was used as a quiet “art bomb” amid the educational display detailing John Cabot’s “discovery” of Newfoundland and as an exhibition with its own dedicated room.  Our Mother(s) Tongue traced the painful loss of the Dene language and culture through images of a human tongue pricked with sewing pins and alternatively adorned with golden syllabics.  Both kinds of images were seductively beautiful and masterfully crafted, lending a subtlety that kept the exhibition from being strident protest art–an accomplishment, particularly during the 150th anniversary of Canada’s Confederation.