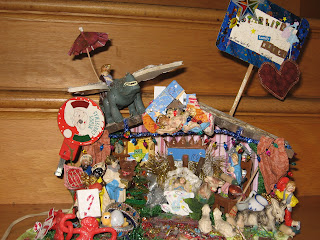 This glue-gun fiesta is Modern Nativity by Rachel Ryan, which I purchased from her recent solo show, Waking Dreams, at the Craft Council Gallery in St. John's.  It was listed NFS but I was smitten and when I had the opportunity to interview Rachel I asked if she was interested in selling it to me.   It is a fine example of messy craft, an exuberance of glitz and glam.  To me it was funny, irreverent and just what I needed going into the holiday season.  Remember what I said, "life is messy so why can't craft be?"  Rachel Ryan has been known for superb design sense and finely controlled technique.  I was really intrigued when I saw her take on kitsch.  Ryan's life over the past few years has been a rollercoaster ride of events and emotions:  her mother finally passing away after a battle with cancer, the end of her marriage after several years, etc.  She was giving herself permission to color outside of the lines.  This is what I wrote in my notebook at the show, "Rachel Ryan has exploded out of her cocoon.  Ryan has created a body of drawings and wall hangings and mixed media installations that bristle with bold energy and powerful emotions.  Gone are the contemplative landscapes, the icebergs that on closer inspections contained women or the birch tress that housed stately spirits.  They have been replaced with equally soulful work but this latest show is extroverted rather than inward looking.  Waking Dreams is a centrifugal storm, an outpouring of complex colors, spiraling stitches and layers upon layers of quilted swatches of fabric and paper." Ryan's work was about - as one piece was titled- The Wreckage of Change.  Not just her personal life but also the social backdrop of tsunamis, financial crisis and war, which had extra meaning for Rachel as she had been part of a military family, a boat in tow through a succession of postings.  So, when the only thing in life that is permanent is your marker maybe what you need is a little kitsch.  The occasion for the interview was preparation for a tour I gave in mid October to a cruise group traveling with Adventure Tours.  Novelist Kevin Major was their group organizer.
Posted by gloria at 08:59 No comments: 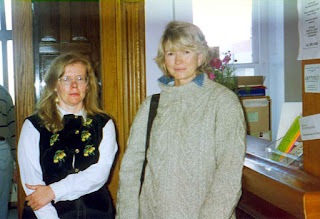 What a pair of sourpusses!  Back in 1997 before she was a felon, Martha Stewart visited Newfoundland.  Bill Gates was picking up the tab as he had hired her to do a piece for an e-magazine he had recently launched.  I think it was called Mongopark.  Anyhow, Martha brought her entourage and filmed a segment for her TV programme at the same time.  Martha was not nice, I remember watching her interact with her crew and I never heard her say please or thank you and she really ordered them around.  I thought to myself, "if this is what success looks like I don't want it."  But I was impressed with her ability to focus.  The lady was like a laser.  And she was very intelligent  The Craft Council of NL opened up so that Martha could shop privately.  A few members were invited to be on hand to answer questions about their work.  I was also invited to help with the answers and Martha asked me about hooked mats.  In the end she bought a hooked mat with a moose on it.  She was disappointed that she did not see one during her visit.  Martha did ask questions about Newfoundland's tradition of mat making.  It was clear she had done her homework and already knew about Grenfell.  I wonder about the impact Martha has had on the state of craft practice.  I'll end this post by showing the more public face that Martha usually shows on camera.  Life is messy why shouldn't craft be messy sometimes too. 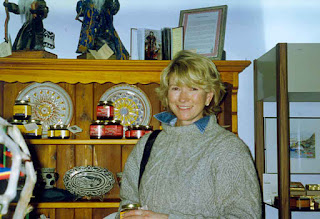 At this year's University Art Association of Canada conference - an annual event for academics and scholars of art history- her name came up more than once during the craft sessions.  This year the session of 8 papers focussed on the theme of "messy craft" a term we've inherited from Glenn Adamson in the U.K.  It refers to the practice of deliberately flaunting the conventions of masterful technique within craft practice.  Think of it as abstract expressionism versus realism.  You'd never think of Martha Stewart in terms of messy craft unless, as Sandra Alfoldy pointed out in her presentation, it is to describe an amateur's failed attempt to aspire to Martha's perfection.
Posted by gloria at 11:58 No comments:

Email ThisBlogThis!Share to TwitterShare to FacebookShare to Pinterest
Labels: Martha vs Messy Craft 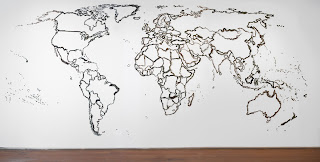 Each year the Surface Design Journal publishes an international issue with a focus on another country.  This year it was Canada's turn and I was asked to write the lead article.  It was released in late October.  Several months prior, Patricia Malarcher started discussing the article.  What was distinctive to Canada?  Where there any unique historical textile traditions?  I started out looking at things like the hooked mats on the East Coast, etc.  But a hooked mat from Maine looks a lot like a hooked mat from New Brunswick.  That started me thinking about regionalism in Canada, which in turn made me consider how our population is strung along our border.  I recalled how the cowboy culture of Alberta that I experienced out in Banff was similar to the culture I experience south of the border in the same region.  But I didn't expect a readership of textile artists in the States to be interested in a social studies lesson.  Patricia and I agreed that I would discuss regionalism, multiculturalism, etc as seen in the work of contemporary Canadian textiles.  It wouldn't be a dog and pony show with lots of artists but be more exclusive.  So, I picked Barb Hunt from NL to talk about the Canadian position on international peacekeeping, pacificism, etc.  Her work (seen above) made from military uniforms to depict the map of the world was a great starting point.  The piece is called the Old Lie - and represents the military presence through out the world. 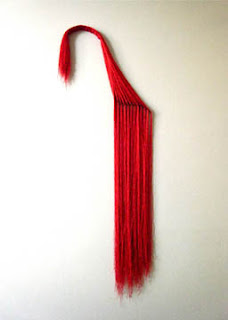 Kai Chan, Silk
To discuss Canada's early recognition of gay marriage, multiculturalism, language and tolerance I picked Kai Chan's work for its lyricism and nuance.  Kai can do so much with subtle grace in his work and he touches on these issues. 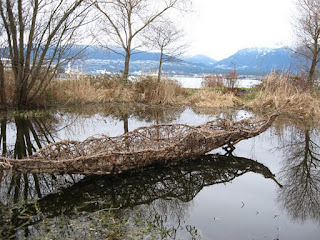 The third artist that I selected was Sharon Kallis from B.C. - who by the way is featured in the current issue of Canadian art.  Sharon works with teams of volunteers and communities learning their concerns and talents.  They harvest invasive species and use them as natural raw materials for her fibre creations: quilts, boat sized baskets and installations.  The work of Kallis allowed me to talk about the Canadian landscape, our relationship with nature and touch on colonialism as seen through the lens of ecology.  To quote Kallis, "There is a uniqueness to everyone's mark and what they make even if everyone is doing the same action.  It's like the saying about Canada being a mosaic.  We are part of the ecology and it is important that we don't dominate it."
Posted by gloria at 13:55 No comments: