I Heard the Birch Tree Whisper in the Night –a Gerald Squires Documentary by Kenneth C. Harvey 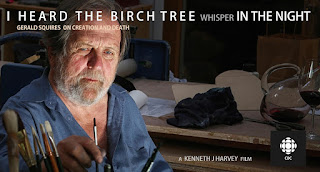 The highlight of the 17th Nickel Film Festival was I Heard the Birch Tree Whisper in the Night–Kenneth Harvey's first feature length film.  I was so determined to see this documentary about the late painter Gerry Squires that I bought a ticket a month in advance and it was a good thing because the screening quickly sold old, as did the one the following day.  I returned on the second day in order to catch the Q&A session with Kenneth Harvey.

Based on the strength of the two-minute trailer, CBC bought rights to the film.  (The duration of the film consequently is what is called a CBC hour, i.e. 45 minutes.)  The trailer shows Gerry Squires in his studio sitting before a pair of huge blank canvases, which is also the opening of the film.  It is a poignant moment, a trembling Squires recalls for the camera the moment he realizes he is deathly ill.  Contemplating a shivering birch tree in the failing evening light of spring, Squires– porous with receptivity– comes to accept his dire situation.  Fortunately, Harvey resisted the conventional wisdom of documentary making and the filmmaker did not go for the close-up.  Instead, he turned off the camera and hugged his friend and subject, something Harvey says happened more than once during the two years of filming and twenty hours of interviewing Squires.
/www.youtube.com/watch?v=-z1TsLgUh8Q

Harvey walks a fine line with this film and the viewer benefits from the respectful distance that Harvey adopts.  Originally, Harvey explained, this project was supposed to be a short film about the painting of a woman's portrait.  It would document that near supernatural process of putting oil paint on canvas to capture a person's essence.  As a photographer, who had also made a portrait of the same woman, Harvey was interested in the shifting perception of the artist and the subject's likeness.  However, the nature of the documentary took a radical change when Gerry Squires' health declined.  The act of Squires painting would remain and it is in Harvey's words "the spine of the film". The viewer gets to see Squires create an expansive landscape and fill those two blank canvases all the while talking about the intimate process. 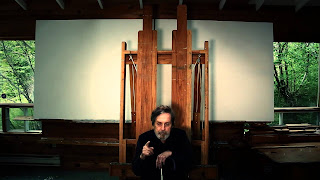 As a novelist, Harvey brings seasoned narrative skills to the documentary.  The film traces Squires career but also fills it with a cast of colourful characters from his life.  During the Q&A, he referred to artists Clifford George as "the comedian", Stuart Montgomery as "the wild card" and curator Caroline Stone as "the academic".  Inspired editing, juxtaposes Gerry Squires' romantic accounts of how it was necessary to his artistic process to live in the lighthouse with practical wife Gail Squires' version pointing out the perils of living, near penniless, with small children perched on an ocean side cliff.  The hints of humour and outright belly laughs, combined with the universal themes of life, death and the differences between men and women are what will give the documentary appeal to audiences beyond the province and country. 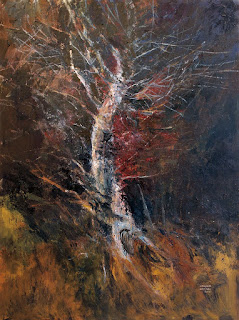 On June 10th, I joined artist Bill Rose for a tour of his show, A Warm Narcotic American Night at the Emma Butler Gallery.  What follows is an excerpt of our conversation.

• GH: I think when I first came across your art I would have described you as a social critic and now I'd definitely add mischief-maker.  How would you describe your role or character?

Bill Rose:  It is very difficult to be a social critic without being a bit of a mischief-maker.   Sometimes you have to make something that is disturbing or funny or both, to get your point across.  Maybe, having been the youngest in my family has set me up as a clown or entertainer, in an effort to get attention.  At the end of the day, I like to think of myself as the tall boy at the back of the class who is shooting spitballs at the blackboard.  But of course I am also interested in making "beautiful" objects; just writing text on a canvas doesn't really cut it for me.  Maybe the social commentary in my work is just a way of assuaging my guilt at having spent most of my life making luxury items.

•GH:  Your method of working is incredibly labour intensive– was that part of the reason to include some earlier work in this show?  I found it a welcome departure for a show in a commercial gallery.

Bill Rose: I often get bored just looking at painting after painting when I visit other people's solo exhibitions.  So when I am assembling a show I think about the person who is going to be viewing the work.  I feel a need to entertain.  I like to think of the exhibit as a variety show.  In some ways, I think my recent show at The Emma Butler Gallery looks like a 6 person show instead of a solo show. I had over 60 works to choose from.  I made a list of about 30 and gallery director Alison Butler made a list of 30.  By combining both lists we came up with the final list.  The earlier pieces that we used all seemed to fit well with the show's title. i.e. You Have a Spot on Your Dress, Louise, Hit Parade, There's a Crack in Everything.

•GH:  One of the reasons why I enjoyed it was that it contextualized the most recent work.

Bill Rose: You know the characters may change and the specifics may change but at the end of the day I think my whole body of work can be more or less characterized by the van Gogh quote which I used on one of my first text paintings back in 1989..."There'll never be an end to human misery".  As a teenager I considered being a journalist.  I went to university and got a BA in English.  I was very much taken by the journalist's credo:  To comfort the disturbed and disturb the comfortable" I try to bring layers to the work by using text, juxtaposition, humour, irony…Even though beauty in art seems to be suspect these days, I also am interested in making beautiful  objects.

•GH:  I was intrigued by the different methods represented, such as stamp pad prints, collages, oil painting, mixed media with inkjet transfers...They were united by a consistent aesthetic.  Do you see it that way?

Bill Rose: When I started doing text back in the late 1980s I found that this was a way for me to be more political in my work.  Before that time I was basically teaching myself how to paint in a photorealistic way.  Once I figured out a way to make photoreal paintings (by way of the grid), photorealism was no longer that important for me.  Photorealism had become a trick...a sleight of hand.  The painting needed something else to anchor it.  However the photorealism does serve the purpose of getting the work noticed.  Our culture puts a great deal of importance in images that are realistically rendered.  The finely rendered image is the bait that attracts the quarry.

•GH:  Let's explore the relationship between the text over the image.  I've heard you refer to it as a veil.  That brings to mind seduction and a welcome tension.  It's also an access point for the viewer.  Can you elaborate?

Bill Rose: The text over the image tends to make the image recede.  It creates a feeling of visual depth.  It also acts like a veil.  It partially blocks the image or impedes the viewer from having an unobstructed view.  Its a kind of tease...Text also reminds the viewer that this is a painting; as in Magritte's painting of a pipe...C'est ne pas un pipe.

•GH:  I also found it interesting in at least one instance, you've gone back and changed the text.  Can you tell us about that experience?

Bill Rose: I began to feel that the original text on the large Niagara Falls painting was too obvious.  The text was a quote from Oscar Wilde:" Niagara Falls is only the 2nd largest Disappointment in a New Bride's Life".  I had the painting hung in my living room and every time I looked at it, I knew it had to be changed.  Eventually I came across the present text by J. Paul Getty which I immediately knew was the right choice.  The text, "The meek shall inherit the earth but not the mineral rights" was perfect.  It was a clever play on words, ironic and darkly true.  I purposely didn't totally obliterate the original text.  If you look closely you can see the remnants of the Wilde quote ... a kind of scar.

•GH:  I have to ask you about the two images that integrated the baby blocks.  This felt playful but in an ironic way because they were also very serious.  Is this a path you'll take again?

Bill Rose: I had these blocks around the house for a long time just waiting for something to arise where I could use them.  The painting of the hen was a little piece that I hoped would say something about vegetarianism and the food industry's treatment of animals.  The piece was around for at least 6 months and I couldn't come up with anything.  Also with it being such a small painting, I could only use a word or two.  For some reason the word CLUCK came to mind.  It made me laugh.  And then I thought of the blocks.  As soon as I laid the blocks across the bottom of the canvas, I knew it was finished.  At the time I also had the painting of a refugee just sitting in the corner, still not fully resolved.  I don't know where ideas come from but out of the blue I thought HAPPY MEAL.  It was perfect. In a world where people are starving, we here in the west have to make food fun before our children will eat it.