Back in 1993, I had an unusual experience.  The Koffler Gallery in North York had commissioned me to write an essay for an exhibition titled (and yes this is supposed to be all one word) DEERCROSSINGATTHE SIDESSHOWWITHOUTTHE PIANOPLAYER.  It was to be a solo sculpture show by Viktor Tinkl.  To my surprise, Viktor told me that he did not want to be interviewed for the essay.  When I asked Tinkl for his resume so that I could research him, I was given a piece of paper that said:  Viktor Tinkl Resume…BORN LIVING WORKING PLAYING PLAYING WORKING.  Refusing to be thwarted, I went to speak with his dealer, Av Isaacs.

When Toronto art dealer Avrom Isaacs first saw Tinkl's sculpture he was struck by how many categories of art the work alluded to and yet didn't conform to.  The rotary machines and revolving disks might have been Dadaesque except the stylized figures were more like Folk Art.  The bold references to popular culture were almost Pop Art and the chromatic intensity of the contrasting colours was nearly Op Art.

The use of found materials was better than any Found Art Isaacs had seen in the Canadian art community.  Clearly, Viktor Tinkl had an ability to invest almost anything with its own fantastic life.  Isaacs concluded that despite all the apparent allusions, "Tinkl had really gone his own way."

I reported this to Tinkl to get his response.  "Oh give me a break –I just use things that no one else wants." While he may not believe in the usefulness of art categories, he does believe in the siren song of a bottle label or juice can.

Eventually, I found my way to New Durham and the Tinkls' home.  Luckily, his wife is a quilter and so I found common ground that way.  Also, I learned to call Viktor's studio a workshop.  The man is noted for his humour and distaste for pretension.

So, I started the essay with a classic Viktor Tinkl story, it goes something like this:

When the Tinkl Family's pet chicken died one winter it presented a small problem.  Taking her to the dump was unthinkable and the ground was too frozen to dig.  Viktor and the kids decided to build a funeral pyre.

For this special occasion, Viktor decided to surrender his collection of 14 Christmas trees, which over the years had dried to tinder-perfection.  Originally collected for transformation in some sculpture project, they became fuel for the pyre.  Today Tinkl still marvels "do you know how many Christmas trees it takes to…

After they had solved the problem of the chicken rolling off the pyre and the mission was accomplished, the sculptor speculated to this sons that one day when he passed away they could do the same for him –except they could use "their legacy," the workshop-like warehouse full of Tinkl's sculpture.  The sons were horrified.  "There are laws against that!  What would the neighbours think?" objected the older one.  But, Viktor observes, "the younger one, he saw the humour in it."

The term "art dealer" has been replaced with the more gentrified "gallerist" as if to suggest the earlier term had connotations of car dealer or drug dealer.  A man who made the term "art dealer" a proud and creative one passed away on January 15, 2016.  Avrom Isaacs or Av, as I used to call him, was a leader in the Canadian art scene and in many ways one of my mentors.  I knew him while I lived in Toronto and first wandered into his Yonge Street gallery while finishing my Master of Arts degree in philosophy in 1980.  Isaacs didn't study art history either it turns out. He had a degree in economics and political science, also from the U of T.  I had come from Montreal but he was originally from Winnipeg. We were both autodidacts and cultural omnivores:  big fans not just of visual art but also of a broad range of culture– everything from poetry and theatre to experimental music.  When we wanted to learn about something we waded into the field and learned first hand.  Av delighted in my childhood stories of how I would wake up in the morning and discover my father's trophies from poker playing, such as Venetian glass or Inuit stone and bone carvings.

Reflecting its owner's taste, the stable of artists at the Isaacs Gallery was very wide.  One minute I would be looking at a historical painting and the next it would be a fresh canvas or sculpture from Michael Snow or Gordon Rayner.  In between, it might be a mask from New Guinea.  When Av learned that I had a keen interest in Inuit art, he gave me a special treat.  He took me to what was in essence his personal warehouse.  More diplomatic individuals called it his loft storehouse.  Here was the treasure trove–shelves upon shelves of art!  I got to handle the work of Karoo Ashevak and Jessie Oonark.

I wonder if the term "stable" will be replaced with portfolio in reference to the collection of artists that a gallery represents. Artist John Greer teased Av once about the term "stable" asking if it suggested livestock or stability.  After an initial frown, Greer says that Av blossomed into a smile.  I will miss those blossoming smiles.
Posted by gloria at 13:13 No comments:

Email ThisBlogThis!Share to TwitterShare to FacebookShare to Pinterest
Labels: Av Isaacs Dies at 89 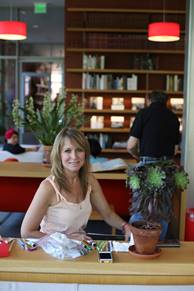 When I last saw Charmaine Wheatley I was participating in an artist performance piece.  I was a willing reveller with sidewalk construction workers while Charmaine was more a Biblical harlot.  She was being carried aloft a palaquin of taxidermy bears, moose, etc.  The confused public watched uncertain if we were a new religious group or a sorority.

This time it was my turn to be confused when I received this press release from a Boston art gallery and residency where it appears Charmaine Wheatley is painting watercolours and doing polite things.  Maybe it is all a part of the balance of life.  Actually, Wheatley's output is diverse and the activities that are described by the gallery bring to mind the profile and sketches she did while visiting Mary Pratt here in Newfoundland.

BOSTON, MA (Jan. 2016) – Artist-in-Residence and Canadian artist Charmaine Wheatley spent many mornings in the Isabella Stewart Gardner Museum’s courtyard with her miniature watercolor kit, painting nasturtiums cascading from the windows, works of art, gallery employees, visitors and other noteworthy moments of her time living there.

The result is an exhibition of 25 drawings and sets of objects called, Charmaine Wheatley: Souvenirs, in the Museum’s Fenway Gallery through Oct. 10. Wheatley, a Canadian who lives between Newfoundland and New York, is a performance and multimedia artist. She produced most of the work in the exhibition as a direct response to her residency at the Museum in 2012, and it captures an artist’s unique perspective into the life, language, and history of a museum through a very personal form of portraiture rooted in conversational exchanges with people. Her work is intimate and unique as a result.

As an Artist-in-Residence, Wheatley spent weeks exploring the galleries and archives. She loved pouring over Mrs. Gardner’s guest books, photographs, sketch books, watercolors, and other correspondence from her many admirers. She spent time in the Conservation Labs drawing objects and textiles, including a tiny, narrow purple pair of satin shoes with Louis the XV heels from Chapelle, in Paris that were Mrs. Gardner’s. They are among the items included in Souvenirs which was curated by Pieranna Cavalchini, the Museum’s Curator of Contemporary Art.

Wheatley appreciated how Mrs. Gardner spoke with artist friends, and when she was in residency again this past September 2015, she spent time greeting visitors in the Living Room and drew live portraits of them while conversing.

For the exhibit, Wheatley created a special artist edition (1/300) and five artist proofs – in the form of a 3-D printed small tin box filled with reproductions of her watercolor drawings and notes - that is on sale in Gift at the Gardner. “Enclosed please find a selection of drawings, begun as a method of keeping track of moments during my overwhelming artist in residency,” writes Wheatley in a letter included in the edition. “Recording a passing moment, intending to do a perfect job but then my subject matter moves or I’m bumped or have to move myself… something always happens to make my perfect imperfect but that imperfection makes each mark human…unique…accepting life as it finds me is my kind of perfect. More manageable and honest would be to consider these scratches of observation as souvenirs, snapshots. Drawing, being slow, affords the chance to sink more fully into the moment, noticing sounds, smells, feelings.”

Wheatley has written several books: Beau Fleuve: The Heart of North America (2006), 30% of Buffalo (2009), and Brett’s Ball (2014). She has published comics and produced performance work for various galleries in Canada, Boston, Buffalo, New York City, and Amsterdam. From 2002 to 2005, Wheatley teamed up with DJ sound artist Taketo Shimada to create performance projects based on “Charmaine,” a 1920s song written by Erno Rapee and Lew Pollack. Using printed materials, sound, and sculptures, the work was presented at galleries in New York and Toronto.

Her work is held by the Museum of Modern Art, and she has also been an artist-in-residence at Pace University, Seven Below Arts Initiative, and the Confederation Centre for the Arts/Parks Canada.

The Artist-in-Residence Program at the Gardner Museum is directed by the Pieranna Cavalchini Tom and Lisa Blumenthal Curator of Contemporary Art and is supported, in part, by the National Endowment for the Arts and the Barbara Lee Program Fund. Wheatley's residency was also supported by The Andy Warhol Foundation for the Visual Arts. Additional support provided by the Canadian Council. The Museum receives operating support from the Massachusetts Cultural Council. Wheatley received direct support from The Canada Council for the Arts; Newfoundland and Labrador Arts Council.

A girl needs a place to wear her feathered boa

As 2015 drew to an end I decided to do something I had not done in forty years – go out for New Year's Eve.  I was lured out for a few reasons: one, being a friend who was visiting from British Columbia; two, being a 75% off sale at Sears where I discovered the perfect blue lace top to go with my feathered boa and lace skirt; and three, the trifecta of my favourite dance band Ouroborus, Kubasonics' front man Brian Cherwick,
and the aerial talent of Wonderbolt's Hilary Walsh and Keely Whitelaw.  At last, I was going to a New Year's party where people actually knew how to hang from the ceiling.  No alcohol required.  To say it was a memorable evening would be an understatement.