Happy Birthday Frankie! Or anatomy of a perfect party

Last Friday evening I attended a Lindy Hop on the Rock birthday celebration for Frankie Manning, who is considered to be the founder of the Lindy Hop dance style.  Manning passed in 2009 at age 94.  He quite literally sprang to fame with aerial moves introduced into a more traditional, but still amazing, swing style dance.  Frankie introduced some of the rolls and flips, those big, dramatic moves that require confidence and trust of both lead and follow, that wow an audience.

To celebrate the occasion the Lindy Hoppers declared it a hat party.  We were all invited to wear a hat with our favourite swing outfit.  I wore a sapphire blue dress with a full skirt that flairs out on the spins, and wore a wide brimmed black hat with a leopard band; I brought along my blue feathered boa for good measure.  When I walked up to the bus stop I spotted a man in a black fedora who said with pleasure in his voice, "I know where you're going." 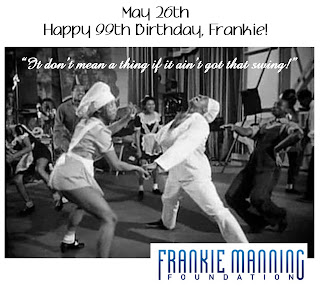 Admission to the party was a paltry $3, affordable to all.  The only beverage served was ice water.  But we had balloons and a dance filled agenda.  One organizer had devised fun-filled facts about Frankie Manning.  Another had learned Frankie's signature moves to teach us, while another had recorded Frankie's favorite tunes for us to dance to.  We danced, we laughed and virtually melted with sweat.  As a diversion, one Lindy hopper had brought along a collection of vintage hats for us to try on.  I found a fascinator with huge blue flowers to match my dress.

In preparation for the evening, I looked up Frankie Manning and was fascinated to read about the rent parties that African Americans held in Harlem to literally raise rent money.  This was the casual setting for live music and memorable dancing and where Frankie at age three saw his first swing dancing.  It would have been 1917.  I learned about the only integrated ballroom at the Savoy where both races could dance everything from a waltz to the Charleston.  That dance floor featured Kat's Corner where the serious dancers would compete and where Frankie distinguished himself with the "air step".

My father used to swing dance and described himself as a "jitterbugger".  As a little girl I watched him compete and bring home trophies from Bellmont Park.  At home, I would dance with him and he would swoop me between his legs and throw me in the air.  It gives me joy to swing dance now, although less dramatically.  One my favourite group dances is the "shim sham" and I can "sugar push" all night long.

On his 80th birthday, Frankie Manning danced with 80 partners–now that's a goal I can aspire to. 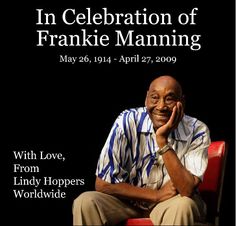 What do actor Rick Boland and Lego have in common?

The sun is shining on a long weekend here in St. John's, NL but I keep having dark thoughts about my increasing awareness of violence in my immediate environment.  Maybe it is a little self-indulgent after my brooding about all the war related art that anniversaries inevitably bring…but my mood plummeted when I learned of the recent beating of actor Rick Boland.  A friend in the theatre community had shared with me via Facebook a fundraising plea to facilitate dental work for Boland.  I believe Boland had been brutally assaulted in our downtown area.  The plea was linked to a gofundme effort organized by Anne Marie Annonsen for $4,000 stating that "not only so that he can eat but also as an actor.  Help bring back his lovely face!" I am happy to report that 84 people contributed $3,735 in a five-day period.

When I first heard of the attack, I had trouble talking about anything else with friends I met in cafes or on the street.  I am aware of attacks in the bathrooms of our high schools, which we contextualize as bullying.  I am aware of current wars through the refugees I meet at social events.  I don't need TV or the Trump campaign.  It just keeps getting closer to home.  And it starts to dawn on me that violence is everywhere.  I remember my rationalization that one of the reasons why I picked small city St. John's to settle in and raise a family was that it was safer than the big cities of Toronto and Montreal that I had previously lived in.  I don't know if I was foolish, if things have changed, or what the appropriate explanation is.  I do know that it doesn't seem to make sense anymore; that no effort to join the dots make connections or find meaning in these horrible actions will make a difference.  At least not right now.

So, I try and divert myself.  Enjoy the company of gentle friends; avoid the news on TV, radio and stick to the art section in an international newspaper.  I find an article about Lego, the children's toy building blocks in today's Guardian.  I have fond memories of Lego and have always wanted to do an exhibition with the colourful stuff.  Years ago I reached out to our Lego distributor here in the province and had made an encouraging start but never pursued it because of family demands on my time.  I click on the article link to find out more about the current world of Lego.  Guess what I find?

It is an article (the kind that is so well written I wish I had done it) with the headline:  Lego 'arms race': study says company making more violent toys.  "Am I being haunted?" I ask myself.  I try a different research path of links and read, "Lego: refusing to sell bricks to Chinese artist Ai Weiwei was a mistake".  I learn about another artist interested in Lego - Nathan Sawya.  But I stop following links that are Lego themed when I discover a Polish priest who has pronounced that Lego is really the work of Satan.
Posted by gloria at 10:50 1 comment:

The Door You Came In 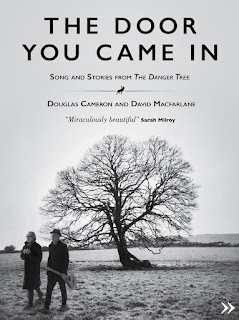 When author Alice Munro discovered David Macfarlane's book The Danger Tree she wrote that she was "stunned. It is so good. [It's] about the best prose ever to come out of this country, for my money." That's high praise coming from one of Canadian literature's luminaries.  Now we have selections of it on stage as spoken word from David Macfarlane's own lips as a 90-minute production.  But what completes the moving words of Macfarlane is Douglas Cameron's music, lending the stories ambiance–teasing out their moody subtlety.  The result is that the audience is immersed into a world of narrative and melody that stretches across many of the key events that shaped Newfoundland's history and Macfarlane's own Goodyear family.

The Door You Came In is a two-man production; a relatively modest affair that makes it stand out from the glitzy, big cast musicals or even the smaller, cleverly crafted stage productions with multiple doors and windows.   No video or flashing lights, no special effects except for those created by two men on a stage, be it Macfarlane imitating the sound of his grandfather striking an Eddy match and drawing on his pipe or Douglas Cameron's jigs and ballads on drum, mandolin or ukulele.  There is something very memorable about Macfarlane saying that to listen to his mother you'd think "Bing Crosby took up more airtime than Jesus" and then to have Cameron croon a snippet of Crosby in the background.  This will make it an ideal production to tour through Newfoundland and Labrador, Atlantic Canada and Ontario during 2016.

Even though the stories that are presented on stage span topics and events as varied as tuberculosis, Confederation, a fishing expedition up the Labrador–"too dangerous to ask for permission"–tragic lovers, ghost stories, pirates and limping business ventures there is a characteristic intimacy that unites them and gives the evening an emotional cohesion.  There is a consistent feel of close personal relationship between two people, a quiet and private atmosphere and detailed knowledge of a character's personal world.  The title of the production refers to a favourite saying of Macfarlane's mother that bid visitors to "leave from the door you came in".  For some it is an indication of a superstition not to leave misfortune or death in the house, not to break a charmed circle, while as Macfarlane observes it might have been his mother's "Newfoundlandish" way of telling people on the mainland, where she spent most of her life, where she came from.

World War I and the price it exacted on the Goodyear family are also told in the story selections.  We are provided with searing images like when Stan, "who was good with horses", is killed by a direct hit that was so devastating that others could not tell from the carnage where the man stopped and the horse began.  It is clear why the solitary, battle stripped "danger tree" becomes the real monument to so many deaths rather than the more heroic bronze caribou.
Posted by gloria at 08:15 No comments: