No Longer Taboo, Women and Tattoo Culture in Newfoundland 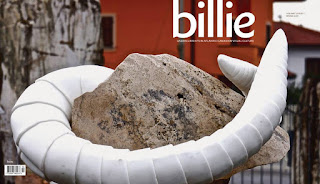 When Billie magazine's editor, Terry Graff, invited me to write an article about my tattoo research for an upcoming issue I was thrilled (as the cliché goes).  One, I was stoked to discover that the Atlantic region had a dedicated arts magazine and two, I was being asked to write about a cherished topic–tattoo culture.  What gave me a little pause was that the thematic focus of the issue was women artists in the region.  Correspondingly, I was to write about women tattoo artists and women's tattoos.

I tend to shy away from gender-based analysis on most topics and I don't even refer to myself as a feminist.  Tattoo culture has been heavily sexualized in popular opinion, I believe, largely because it is associated with the body and to a lesser degree because it was historically seen as behaviour that belonged on the margins of society–the land of bikers and their "bad girls".  We can all hope that the day of "the tramp stamp" is over.  Anyhow, I was concerned about reinforcing or perpetuating stereotypes and I was uncomfortable.

Precisely because of my discomfort with the topic I decided that I needed to "think my way through" this issue as opposed to dismissing it as irrelevant.  Admittedly, tattoo culture has entered mainstream society but the troubling consequence is that it is often regarded as an ill-considered fashion statement–something you regret "when you are old and wrinkled".  Furthermore, none of the women subjects I had interviewed over the past four years had led me to believe they did it for reasons that were specific to their gender.

Memorializing the loss of a loved one–parent, partner, child and even pets; marking an accomplishment or rite of passage such as graduation, the first trip to Europe or a battle with cancer; indicating professional affiliation or membership in a group; a passionate interest from popular culture such as song lyrics or comics–all of the most common narratives behind tattoos are shared by individuals regardless of where they are on the gender spectrum.  What was left to say?

I took the question to both female and male tattoo artists.  It turns out, that the long-term historical answer was that we didn't have female tattoo artists in Newfoundland and Labrador with more than ten years experience.  The best-known female artist is the province is Laura Casey who operates Lady Lo's Custom Tattoo Studio with the help of two female apprentices that she has trained.  Interestingly, Casey's clients are roughly 50-50 in terms of gender and none of the ones I interviewed selected Casey on the basis of gender.  It was her professionalism in terms of customer service and the quality of her artwork.  Dave Munro who operates the longest running tattoo studio in St. John's has trained two female apprentices as well.  So, we have a come a long way from tattooing being a macho preserve but the trend is young and still growing.

The most significant societal trend I observed in terms of women's tattoos is that they marked a growing sense of agency.  It was about women owning their own bodies, getting tattooed for themselves.  I spoke with women about their tattoos that were prompted by health crisis and body image challenges.  Also, young Inuit women have reintroduced tattooing to their visual culture that had largely been wiped out by missionary contact.  Far from superficial fashion…no wonder my original tattoo project is called More Than Skin Deep.
Posted by gloria at 11:10 4 comments: