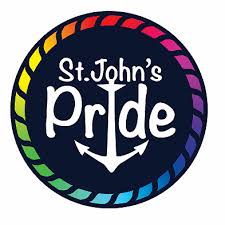 Last week was Pride Week in St. John's.  It is good to see that the week-long event has become more than a marketing ploy with rainbow flags in store windows or even a token ceremony at City Hall.  Pride Week has become a much more inclusive event, with family flair, with readings in bookstores by drag king Doctor Androbox and art activities at The Rooms.  Gender inclusive washrooms were noted in programs.  Times really seem to be changing.

The documentary that traces Gemma Hickey's gender transition over a two year period was also screened at The Rooms.  This documentary is the product of Peter Walsh and his style is understated.  The result is a film that is intimate rather than dramatic and shows a much more vulnerable side to Gemma Hickey.  Hickey (no relation to me) is well known as a social activist, especially as they have championed same sex marriage, fought for survivors of clergy abuse and most recently gender neutral birth certificates.  Clearly, no shrinking violet.

The film starts with Gemma's first day of testosterone therapy.  Since 2014, there have been a spate of tv programs–both "reality" and dramatic– like "I am Jazz", "Transparent" or "I am Cait" that have banked on the growing interest in gender identity.  What makes "Just Be Gemma" outstanding amid this crop of films is its subtlety.  This is not a simple case of transitioning from one gender to another.

There's a very moving section in Hickey's story when she consults with her Nan, who is the family wise woman and matriarch.  Hickey shares that she doesn't know whether she wants to be a boy or a girl.  Nan's advise is to "just be Gemma".  And it is that process of discovery that is the film's strength.  It is not about binary definitions, sensational surgery or miracle hormones.  This documentary reflects on what  is lost and what is gained and an evolving sense of self that impacts a whole family and community.  The film is a coproduction of CBC.  Here's the link:https://watch.cbc.ca/media/media/absolutely-canadian/just-be-gemma/38e815a-00d0bde093e
Posted by gloria at 08:11 1 comment:

Everything from yacking to yoiking


Last night (Saturday July 7/18) was another jam packed evening of talent and good camaraderie at the Sound Symposium.  Even before the opening act there was a tangible good vibe that filled the LSPU Hall.  To me, this is one reason that makes the Symposium so extraordinary.  Not only do you get to experience astonishing talent on stage but you get to talk with the performers afterwords.  I am always impressed by the feeling of community that develops in such a short time at the Symposium.  It is a pressure cooker of musical and sonic talent.  It seems to bring out the best in so many people.

It would be difficult for me to pick a favourite from last nights’ musicians.  Hildegard Westerkamp’s multilayered recorded set based on boat horns was delightful.  Bill Horist’s guitar stylings was a surprise (at least for me) and Frode Kjellheim and Snorre Bjerck’s performance was nothing short of memorable.  I think everyone’s favourite new verb is yoiking.

Frode Kjellheim’s interpretation of yoiking is a soulful blend of jazz and Nordic traditions.  I thought he played the keyboard with tenderness.  Combine this with Snorre Bjerck’s percussion and you indeed have something special.  I particularly liked how he played the rim of his drum set.

What I also found intriguing is how so many music traditions were brought sensually together by Kjellheim and Bjerk.  Was that really Turkish neh I heard blended in the composition?  And Bjerk’s use of ankle bells reminded me of Kathakali temple dancing.    Don’t get me started on his brush work.  Speaking of dancing, it took every shred of my self-discipline just to stay seated.  I know for certain I was not alone in that regard.  It was a comment I heard from several audience members.

My only regret of the evening is that I knew we would run out of time before music.  But that’s what happens when you have so much talent in one room.  Thank you to the staff and volunteers for another wonderful Sound Symposium!  I am sure St. John’s, especially for such a sparsely populated city, is the envy of many provinces in this country.

The Red and the White of Canada Day 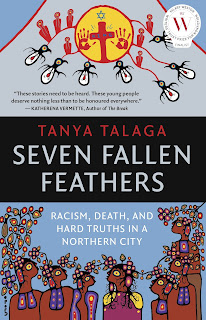 I hope I never have to read another book like this one, Seven Fallen Feathers, Racism, Death, And Hard Truths In A Northern City.  This is worse than dystopian fiction.  Sadly, all these stories are true and exhaustively researched by award winning journalist Tanya Talaga.  Seven Fallen Feathers was on my radar when it made the CBC Canada Reads challenge.  I have been on something of a year-long marathon of learning about Indigenous culture.  When a friend gave me a copy, it fit perfectly in my purse and it became my go-with-me-everywhere book.  As it turns out, I was very glad to read it in short bursts of time and in waiting rooms, airport lobbies, etc  The stories it tells are hard and harrowing–as Katherena Vermette says in her review.  I found them so harrowing that I had to keep putting the book down and I was glad when I was not alone.

Seven Fallen Feathers is heavy medicine and I could only take it in small doses.  When I read that Canada's Indian Act had been used as a template for Apartheid in South Africa, I felt physically ill.

Another curious thing occurred about taking the book with me and reading in public.  There were frequent, spontaneous conversations with strangers.  It seemed everyone had an opinion or their own heart breaking tale to share.  I met two people with direct experiences in Thunder Bay that included open acts of racism (like having a beer bottle thrown at your head from a passing car) and the tragedy of suicide within the family.  All of a sudden being a Canadian meant something different to me.

Thankfully, the darkness of these bleak truths was somewhat alleviated by the National Film Board's Wide Awake Series.  This initiative addresses the need for more women filmmakers and especially Indigenous women filmmakers.  So far, there have been 900 free screenings across Canada that showcase these films.  Last week I was able to attend two, here's a snippet from the press release:


Our People Will Be Healed is 85-year-old Alanis Obomsawin’s 50th film. It follows a school in a Cree community that experienced a remarkable increase in high school graduates after introducing ancestral culture to the curriculum.

Both of the film presentations were accompanied by Q&A sessions and social events.  This gave us a chance to learn more about Obomsawin's and Clements' creative vision and decades long careers.  Obomsawin had a lovely grace about her too and I could only wish to "grow up" and be like her.

The film on the next evening was The Road Forward, Marie Clements’ stunning musical documentary about First Nations activism, told through seven story-songs, performed by an ensemble of some of Canada’s finest vocalists and musicians.  I will never forget the opening scene where the keystrokes of a 1920s typewriter are paired up with the urgent sound of a tribal drum.  The ensemble acting in this film was seamless and the collection of activist musicians from across Nations was inspiring.  Please let there be a CD released of this soundtrack!  Anyhow, long story short –these two films tell much-needed, honest, good news stories of resilience.
Posted by gloria at 08:53 No comments: