Look for the issue.  Just hit the newstand.

What made you happy during the past seven days?  It is so easy to complain and just get poisoned in the process.  So, instead of fretting about things beyond my control, I will tell you about something that made me smile.

I was really pleased that the Alexandra McCurdy retrospective that is about to open at the Beaverbrook Museum in New Brunswick got covered in the current issue of VANS or Visual Arts Nova Scotia.  The writer of the article is Matthieu Comeau and he brings a very interesting perspective to the show.  He was not familiar with her work in either clay or textiles, which also means he didn't bring any baggage of expectations when he walked into the retrospective.  Clay in Nova Scotia can be a very political arena.  So, it is great to get some fresh eyes and fresh opinions.  He carefully toured the show with Alex and also spoke with me briefly at the Halifax opening.  VANS refers to the article as a "profile" rather than a review, which think is appropriate.  It is more like an in depth interview than a critical assessment of the work.  However, he does a very good job of establishing a context for McCurdy's work in both clay and textiles and he shares his careful observations with the reader.  For example, he was drawn to my placement of McCurdy's plates with her silk-screened portraits of famous feminists on a blue piece of indigo fabric also done by McCurdy.  Here's my favourite part in the article: 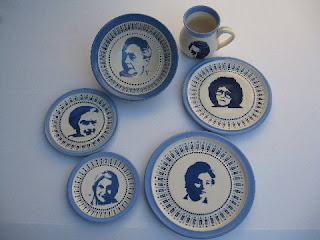 This image is of the white stoneware plates by themselves.

"The pieces bear the faces of strong female artists: Judy Chicago, Barbara Hepworth, Beatrice Wood, Lucie Rie and Georgia O'Keefe.  It is clearly an homage to Judy's Chicago's The Dinner Party.  The simplicity of the work is quietly impressive, but I initially found the choice of women represented a bit puzzling–many of the women represented  produced work that seemed to me so vastly different from McCurdy's, especially those who aren't known primarily as potters.  But McCurdy reminded me that Barbara Hepworth's sculpture often incorporates tensile elements reminiscent of thread, and that Emily Carr did produce some ceramic work.  Her choice of women is determined, however, less by her affinity for their style than by her respect for their "dedication, determination and patience".

Matthieu Comeau I think you really hit the nail on the head.  And you probably don't how well you described Alex herself for she surely is a woman who is also dedicated, determined and patient.  Personally, I am grateful that Alex allowed me to get a bit creative with my installation.  She was very open.

Email ThisBlogThis!Share to TwitterShare to FacebookShare to Pinterest
Labels: The Fabric of Clay covered in VANS 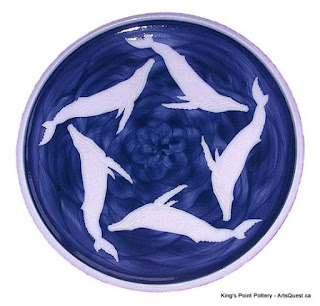 I have often joked that the reason why there are so few craft writers is that most of us have died off (starvation) and that I am an endangered species.  The community of craft writers is relatively small and is something that has troubled me.  When I won the Critical Eye Award I offered to mentor at least one other writer serious in learning the trade.  I've been able to help out a few, for example, that was one reason why I took on the volunteer co-editing of the last issue of Cahiers métiers d'art.  It was to provide assistance to the writers involved and the publication, as it is a prime destination for serious craft writers, scholars and theorists.  But in this digital age of e-zines and website not all publications are printed on paper. 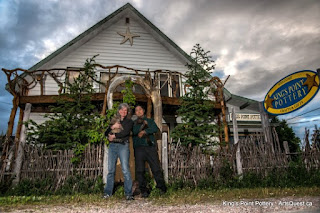 Arts Quests entry about their on-site visit to King's Point Pottery is surprising in its depth and informed commentary on the ceramics, gallery and inspiration for both.  It combines an article, great photos and a jazzy little video of David sporting a goatee (David you are looking downright venerable).  Having been there myself I can testify that Arts Quest does a great job of giving you a feel for the place and Linda Yates and David Hayashida.

Here's an excerpt from Arts Quests discussion of the sea and its inspiration to potters Linda Yates and David Hayashida:

Linda and David’s passionate connection to the sea and it’s inhabitants are well represented in their work. For instance, Capelin, a small fish in the smelt family, is an essential part of the food chain for cod and other marine life. It has also been used for human consumption, pet food, bait and garden fertilizer. Over a ten-year span Linda and David worked on a cast and carved mold of these little guys and now represent these important fish in their collection in the form of plates, dishes, platters and bowls. The next two photos below show some of their capelin mold creations: 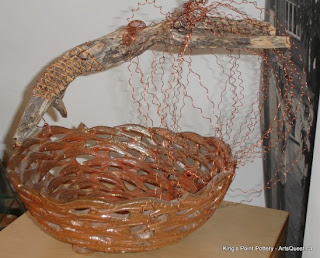 Instead of including a second shot of the capelin inspired work I wanted to include the shot of their new gallery for those you who haven't had the opportunity to visit in person.  Love that blue floor, it's an eye-popper and a great backdrop for the work by more than 150 artists that King's Point Pottery is now able to show and sell. 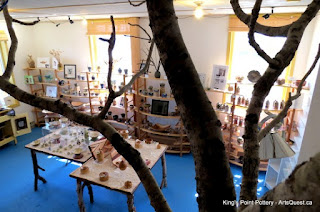 Now, for those you who still not have not voted for Jason Holley in the RBC, Gardiner Ceramic Emerging Artist award, it is not too late:

It's a People's Choice Award and you are people aren't you?

Email ThisBlogThis!Share to TwitterShare to FacebookShare to Pinterest
Labels: Why are there so few craft writers? 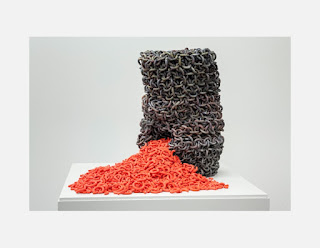 In case you haven't heard the exciting news, our very own Jason Holley has made the semi-finals in Toronto as part of the RBC Emerging Artist competition for the most popular ceramic artist in Canada!
Presented by the Gardiner Museum, the 2nd Annual RBC Emerging Artist People’s Choice Award recognizes the artist whose work receives the most votes from the participating public with a $10,000 cash prize. This year’s nominees are Jason Holley (Newfoundland), Sarah Lawless (British Columbia), Janet MacPherson (Ontario), Julie Moon (Ontario), and Brendan Tang (British Columbia). See the artists’ work on view at the Gardiner and cast your vote from September 4 – 30 at the exhibition or online at gardinermuseum.com.
By the way, it's only one vote per person.


NOTE: Voting will close September 30th although the artists' work will remain on view until October 7.
Jason faces some stiff competition from his fellow ceramic artists.  Sarah Lawless makes lovely organic forms and like Jason she also evokes place - in her case the beautiful B.C. coast- in her video.  Janet MacPherson, Julie Moon and Brendan Tang take a very different approach in their videos.  It more of what I call the "talking head" style and by that I mean it is where they just look at the camera and without any distracting visuals tell you about their piece in the competition.  All the works are currently on view at the Gardiner Museum, which is across the street from the Royal Ontario Museum in case you are in TO, or the big onion as I affectionately call it.  (NY being the big apple.)  I was struck that Brendan Tang was the only competitor with the balls to actually ask the viewers to vote for him.  Frankly, I was not surprised.  I said to myself, "no wonder you've been covered in Canadian Art already."  Frankly, Tang is lucky his work photographs so well.  I know when I've seen it "in the flesh" I was disappointed by how clunky it looked.  But that's just my not-so-humble opinion.
Check out Jason's video, on the Gardiner/RBC website and let me know which approach you prefer.
I was really intrigued by Jason's piece in the competition as it incorporates colour for what I believe is the first time.  His piece is a typical coil composition but this time the broken coils that are spilling out of its core are blood red.  My first reaction when I saw the image was, "this is darker than the new Batman movie".  It represents a new level of vulnerability, of rawness from Jason Holley and I'd like to applaud his bravery. 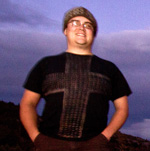 Our lad wearing one of his very own signature chainmaille motif T-shirts.

I have put a "Vote Jason Holley" tag line on my e-mail messages today with a link to the Gardiner's competition website.  I urge you to do the same.  Come on people, let's kick some butt and help our home-boy win that $10,000 prize.

http://www.gardinermuseum.on.ca/exhibitions/rbc-emerging-artist-2012
Posted by gloria at 16:50 No comments: 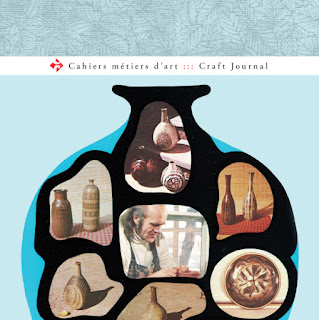 I am referring to the newest issue of Cahiers métiers d'art ::: Craft Journal Vol. 5 No 2 Printemps Spring 2012.  Now, I always look forward to getting my copy in the mail but this time I had a little more invested.  You see, Elaine Cheasley Paterson and I are the guest editors of this issue.  The theme is stated in the subtitle:  "Economy, community and self-expression–Craft and Social Development".

I am going to quote from our editors' foreword to give you a taste of the issue:

From the socialism of the Arts and Crafts Movement to the radical interventions proposed by "craftivists", the material, makers and processes of craft have been mobilized for social change.  Based on this insight a call for papers went out for the 2010 Universities Art Association of Canada conference, craft session.  The papers presented, selected, expanded and revised, discuss the communities created through craft –whether on a local, global or virtual level.

Craft production is embedded in living culture and heritage and is seen as expressing cultural identity.  For better or for worse, it gets pressed into social service because craft is perceived as accessible and useful.  Historically, this has taken the form of job and revenue creation through the sale of products based on traditional skills like weaving, rug hooking and knitting.  Communities created through craft in this way range in time and space from the Grenfell Mission in Labrador and the Home Arts Association in Great Britain to more recent initiatives like the Navajo Crownpoint Rug Auction.

Examples of craft and micro-economies persist today and are linked with contemporary lifestyle issues of creating, buying and consuming "local"…

And then we go on to comment how this is borne out in the particular papers.

Like Cmagazine I consider the Cahiers to be one of those publications that is under-read and I sincerely recommend it to anyone and everyone.  Happy reading!

Oh and before I forget here's a link to their website in case you want to check it out:
http://www.craftjournal.ca/