An opera without music? 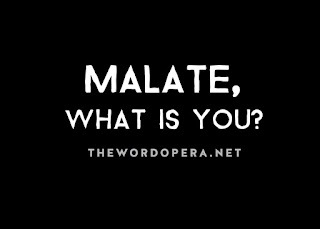 From time to time, I am asked for advice as a professional writer and curator.  When asked for a tip by a junior writer, someone struggling to get published or their parent, this is what most frequently comes to my mind, "focus on content over style" or another version " be clear rather than being clever".  Functionality is key to my writing and career.  So, you can imagine how pleased I was when I was stopped in the post office this week and someone told me that a review I had published in the daily newspaper had helped them understand a local theatre production.  Here's the review:


When Graham Hunt, producer of Beats Around the Bush, characterized the play script as "like Shakespeare with a fresh twist of Hollyood", I thought now there's a lofty goal.  Consequently, I was surprised to discover several soul stirring moments when an extended soliloquy nearly achieves that goal. The play is written by Riley Palanca, who is originally from Manila, and he clearly has a flair for contemporary spoken word.  It was wonderful to be swept up in the melody of the language and sentiment.

The play's subtitle is "The Word Opera."  When I asked Palanca why he chose the term "opera" he explained that when the characters are at their most passionate, when emotions were running high, it was like music to him.  Don't be mislead, it is not a musical.  Opera refers more to the larger-than-life quality of the play and its characters.  And there are plenty of epic meltdowns, lover's quarrels and reunions between the millennial characters.  If this is opera, it is the unconventional opera of the Beat Generation like Allen Ginsberg and Jack Kerouac, who found creative riches in the shadowy underside of society.

For his St. John's debut as playwright Palanca has created a fictional setting called Malate based on the treacherous streets of Manila's gay community.  The Factory's interior with its brick walls and rowdy, street art seamlessly take on the urban character.  Stage lights bathe the actors in bright washes of hot oranges or moody blues helping the audience to focus on the alternating speaking roles of monologue or soliloquy.

The central characters are four gay couples and the play deals with their complexities and issues. One man has a pregnant wife at home ("who glares at him like an anorexic looks at a buffet table"); another a violent partner; the list goes on.  Diversions abound. They are beating around the bush, avoiding answers and words like homophobia. But in dwelling on the specific the universal is uncovered.  Their stage world is Asian Malate but it might as well be the tragic site of the Orlando shootings.

All eight of the cast held nothing back with their performances but it will be the poetic script that I will remember most.  Streetwise but unschooled, Chance solicits Miguel to teach him how to write a poem. In response, we are treated to a parody of "it is a summer's day" as if it was written in turn by Shakespeare, ee cummings, Pablo Neruda, E.A. Poe, Ezra Pound, Kahil Gibran, Sylvia Plath and those are just the ones I can recall.  Or achingly simple lines like "I find my mother in crosswords, in cross stitch, in too much salt in my pasta, in the front row of my shows…" 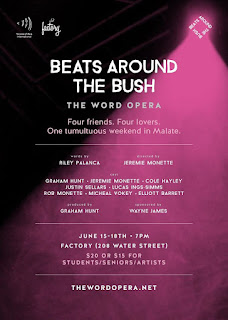 Email ThisBlogThis!Share to TwitterShare to FacebookShare to Pinterest
Labels: Beats Around the Bush reviewed

This past work week was extraordinarily busy with the Nickel Film Festival in full swing - 55 films worth, a word opera to review, and an afternoon of touring with Adventure Canada visitors.

The Return of Throat Singing is a sliver of a documentary that is a scant seven minutes long.  What director Jenn Brown has done is rely entirely on the spare words and the wide smiles of her participants.  There is no narrator's voice to pose questions, no historical perspective to contextualize the loss of an indigenous cultural practice.  But when filmmaker Jenn Brown heard that young women were teaching themselves to sing in that distinctive, urgent humming she had to go and discover it for herself.  "Imagine, a tradition in Nain, which was nearly destroyed by the missionaries.  And now high school girls are practicing their singing during breaks between classes!" exclaims Brown.

We are shown the girls, face to face, leaning rocking with their voices bouncing back and forth.  The girls are in casual clothes and only in one outdoor scene are they in traditional dress.  This is not cultural processed and packaged for Western tourism.  When the girls introduce their songs it is in the simplest of terms, "This one is a love song", "That one was about geese flying over head and how the sounds change."  The songs are sung with evident pleasure but without fanfare.  Learned through imitation and practice.  Brown says it was important for her not impose her view on the revival although she was struck by the women's spirit of independence.  "It really is like a gift from the younger generation back to the elders" she explains.

Inuit throat singing is usually done in duets and almost exclusively by women.  They describe as a game with a leader and a follower.  The leader sets the pace of the rhythmic inhalations and exhalations of breath.  It is a friendly competition and the first woman to loose the rhythm surrenders.  Laughter is a constant feature and is often the tell tale sign that someone has won.

The Return of Throat signing was screened as part of a diverse selection of 55 films from 10 different countries over five evenings.  As an unadorned documentary it was a most welcome relief from many of the other films that although excellently made, were often intense or dark. The Return of Throat Singing stood out with an engaging freshness from the other genres such as comedy, horror and experimental.
Posted by gloria at 05:09 No comments: 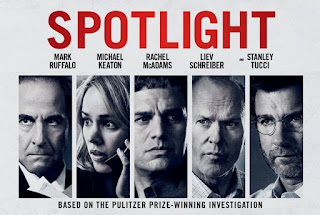 This Friday evening I chose to attend a free screening of the movie Spotlight.  It was an event organized by the Department of Religion at Memorial University.  I went to see the film because the story it tells, of the Boston Globe's uncovering of the systemic abuse of children by pedophile Roman Catholic priests, interested me both as a journalist and as someone who grew up in an Irish Catholic environment.  The city I have called home since 1994 St. John's, NL, is still in 2016 struggling in the courts with the same issues of abuse and its often tragic outcomes of denial, addiction and lives destroyed.  One of the film's most moving moments is in the credits when all the other cities where there have been similar investigations are listed.  It is a very long list; so long in fact that I could not bear to stay for the discussion period after the film.

The story the film tells is well known now.  What most impressed me about the film was the restraint with which it unfolds.  This could have easily been filled with outrage and melodrama.  Spotlight is surprisingly understated and the performances of its stellar cast are reigned in.  It is very hard at times to tell the good guys from the bad guys–hard to distinguish between somebody "doing their job" and being either a villain or a hero.  Nobody is painted with a broad brush.  This is the world we live in filled with status quo, tension and consequences.

Another satisfying twist in the film was that the tragedy of 9/11 nearly derails the team of journalists' investigative efforts to tell the story they had been working on for so many months.  Fortunately, it is an eclipse of events the project recovers from.  When I looked into the background of the film I found an interesting comment about the director Tom McCarthy's intentions. Writer Josh Singer told Creative Screenwriting that one of his goals for the film was to highlight the power of journalism, which he feels has been waning. He explained, "This story isn’t about exposing the Catholic Church. We were not on some mission to rattle people’s faith. In fact, Tom came from a Catholic family. The motive was to tell the story accurately while showing the power of the newsroom – something that’s largely disappeared today. This story is important. Journalism is important, and there is a deeper message in the story."

Email ThisBlogThis!Share to TwitterShare to FacebookShare to Pinterest
Labels: Film Spotlight is about journalism-not scandal

Enchanted by Anita Singh's Microorganism at the Craft Council Gallery 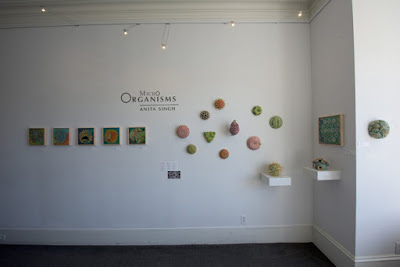 I have long been a fan of the varied, but always passionate, art of Anita Singh.  When I first met Anita more than a decade ago she was exploring the world of printmaking.  Even back then, she was fascinated by the cellular world and would build up elaborate patterns based on her observations of seedpods and bugs.   She was playing with repetition and variation.  High impact colours like pink, orange and vibrant greens sang in Anita's organized compositions.  (And they still do today.)  I remember being tempted to link her flair for colour to her heritage– as Anita was born in Guyana, South America with a Russian and Indian bloodline. She grew up in Montreal and Toronto, where she studied graphic design and printmaking, and lived in British Columbia for 10 years. During a cross Canada trip in 1999, she discovered and fell in love with Newfoundland. Today, she lives with her husband and son in downtown St. John’s, where she works as a printmaker, mixed media artist, and art instructor. 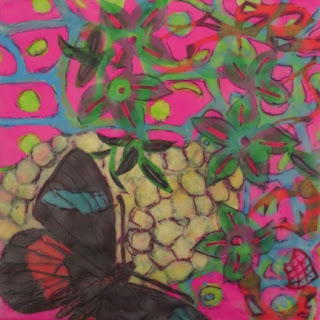 Over the years, Anita Singh has added to her mediums:  book arts and paper-making seemed naturally allied with her printmaking but I was surprised when she took up encaustic.  Now, the voluptuous quality of the wax gave a satisfying dimension to her characteristic palette.  Colour could be subtly suspended.  The organic aesthetic of wax seemed to fit her thematic interests effortlessly although it could not have been easy to master a new technique.  But she was hardly finished.

Anita next took to ceramics, working out of the Clay Studio at the Craft Council of Newfoundland and Labrador.  First, she made vessels but they gradually gave way to more sculptural works.  They took on a new authority when mounted on the wall.

Currently, Anita Singh has a solo show in the Annex of the Craft Gallery.  It is called Microorganism and it is not to be missed.  From the Gallery website http://www.craftcouncil.nl.ca/gallery/exhibitions/preoccupied-pattern/

Inspired by an obsession with patterns, textures and color found in our natural world, this solo exhibition presents and combines ceramic sculpture and encaustic paintings. 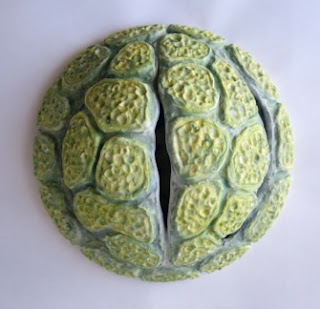