I Don't Do Normal Very Well

Now that October is almost upon us I have to admit that summer is over.  The past few months have been my usual roller coaster ride, with lots of events, fun and the occasional disaster.  I have been reflecting on that time span and trying to pick out my favourite moment.  The problem is that there are so many.

Or there was the time I was at the Avalon Expo and a bearded individual in a leather dress sidles up to me and says, "I hear you're pretty good with a Bo staff.  Would you like to join the combat circle we've got going out back?"

I swear I couldn't make this stuff up.  Oh yes, I have a new nickname too:  "Gloria the incinerator" that one comes from my boxing coach who paired me up against a big black dude. This particular African American gentleman has close to a foot and fifty pounds on me…and the coach tells him "I'm doing you a favour.  She'll make sure you get a workout."

I keep shaking my head and wondering who is writing the script of my life.  No wonder people tease me and say they can't wait for the TV Reality program based on my life.  Like I always say:  Who needs fiction when you have a factual life like mine.

Email ThisBlogThis!Share to TwitterShare to FacebookShare to Pinterest
Labels: sloppy craft gets published 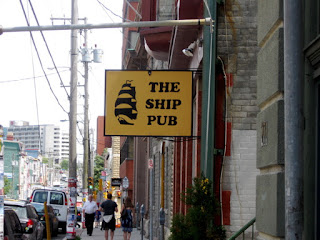 It is Saturday afternoon and other than morning coffee I have consumed nothing.  So, I arrive at the Ship Pub hungry for good food and music.  I plan my visit then because I know my friend Caroline Clarke has organized one of her Bluegrass Brunches.  I enjoy these events because the music is good, the food is good and it is one of the few times in St. John's that the pub can welcome children.  Most folks are drinking ice water or coffee rather than beer even though it is a rare, hot summer afternoon in St. John's.  Everyone seems elated.

I order water, a burrito and Greek Salad that sets me back all of $9.99.  The portion is so generous that even after an hour of happy, rhythmically inspired munching I only get through half of it.  Oh well, two meals for the price of one.

Caroline has a broad circle of musical friends and basically just puts out a call to come and play.  Everyone gathers around the pool table that has been covered up to protect its green and they play.  You are never sure who and what instruments are there.  But you do know that there is no cover charge.  Instead there is a donation jar with the money going to the S.P.C.A.  To me that's a win/win.


In classic St. John's fashion when the group of musician's disbands after playing from 12 to 2:30, a good percentage of them wave goodbye and sing out my name.  And just then a man in formal black and white clothes whisks in to use the ATM machine.  I study his pony tail and I'm thinking, "Where do I know you from?"  And it dawns on me that I remember his showing me his tattoos, which are Dostoyevsky quotes on his thighs.  I can't help but think only in St. John's on a Saturday afternoon in my life.  Out to the sunshine.

Email ThisBlogThis!Share to TwitterShare to FacebookShare to Pinterest
Labels: Bluegrass Brunch at the Ship

Profile of a Busy, Busy Artist

Neon Satori Knocks It Out of the Park

On Saturday August 29th, 2015 I got to see Bannerman Park transformed into a riot of joy.  In one corner of the newly restored Victorian park there were happy people bouncing off each other safely as they were encased in giant plastic balls like hamsters.  There was face painting, fire twirling, a bouncy castle, a splash pad and a swimming pool going full tilt.  But animating it all were the driving and alternating floating sounds of dance music.  It had the feel-good ambiance of a Woodstock music festival minus the drugs and alcohol.  I danced for nearly three hours in the sunshine and shade with strangers– from grandparents to kindergarten aged children.  What made all this happen?

It was Neon Satori that was "rocking the house" from 11 in the morning to 10 at night.  I credit the group for supplying feel good vibes that included all ages and mammals in attendance as well as providing alternative activities like painting on supplied canvas with brushes.  Others on the sidelines played Frisbee to the music.

After ten, the party moved to a downtown nightclub called Levels, where I am told the after party lasted until 6 a.m.  I can only speak first hand about the park event where wave after wave of D.J.s took over the turn tables, sound boards and speakers to create music that could be heard from one end of the park to another–if the wind was blowing in the right direction.  I smiled when I was speaking with staff from the T.D. Bank who were handing out ice cold water and Italian soda for a donation that went to Easter Seals when they said, "we wish we were closer to the music".

One senior citizen commented to me that he had never seen so many people in downtown St. John's happily together in one place.  "Haven't heard a yell or a smack all day".

I think the City of St. John's should be congratulated for organizing an event that brought together all genders and generations in a relatively cost free event.  Everybody was there from Nan to the new baby and the family puppy.  Some brought picnics, others fetched pizza.  You could buy a Beaver Tail from the new kiosk.  Maybe we could invite Obama next time.  (I still remember how smitten he was with the Beaver Tails in Ottawa.)  One young couple had returned from a local Vietnamese restaurant with duck and noodles, which they generously shared with me.  We joked that you used to have to go to a big city to get this kind of experience but not anymore.  This summer I am staying home and pretending I am a tourist.

More about Neon Satori: Neon Satori is a non-profit group of like-minded people whose mission is to give people a fun, educational, exciting experience that is alternative and different from what is being provided in the clubs downtown. They focus on holistic health and well-being, alternative and new music, showcasing local artists and creating an atmosphere where people of all ages and walks of life can get together and act as a community of friends and family.

Neon Satori focuses on responsible activities and looking out for each other. They do not advocate any type of dangerous activity or getting “wasted”. Responsibility is very important in setting a good example for newcomers to the events.  All acts, performances and the time of the Neon Satori group is by volunteer. Donations are accepted at the events in order to cover the overhead costs and to keep the ball rolling on new and improved events for the community. 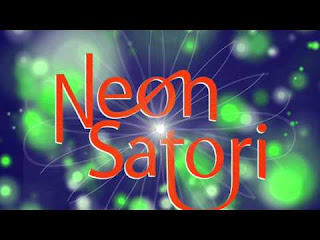