Ann Roberts: with both fear and intrepid enthusiasm 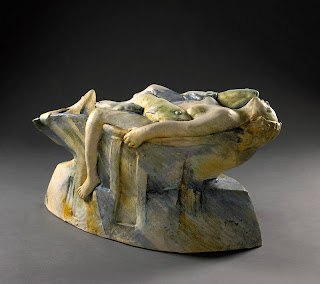 A 50-year retrospective exhibition is a significant milestone in a career by anyone's measurement.  It is a time for assessment, reflection and for facing the demons of past misinterpretation and setting the record straight.  The title of this exhibition, Ann Roberts: with both fear and intrepid enthusiasm, reflects the mixed emotions that come with such a milestone.  It reflects fear and hope like the two sides of a coin, or like the two-headed Roman god Janus, who oversees beginnings and transitions.  Janus looks to the future and the past in opposite directions.  Together, fear and enthusiasm– or hope–represents a whole spectrum of emotions.  This "wholeness" is very characteristic of Roberts and her ceramics practice as a sculptor on a variety of levels.
The preceding paragraph is the opener for my essay in the catalogue for the Ann Roberts retrospective that opens up January 29, 2012 and runs until April 8th at the Clay & Glass Gallery in Waterloo.  January, by the way, was named after the god Janus whom I invoke in the introduction.
When the curator of the Clay & Glass, Christian Bernard Singer, called and asked if I would write the lead essay for the catalogue I immediately said yes.  My dance card was full but I wanted to find a way to do this project.  Back in '93, I had done a 20-year retrospective of Ann's sculpture for the Kitchener-Waterloo Art Gallery.  So although, the timing was less than ideal I thought I could pull the rabbit out of the hat.  Ann had come to St. John's years ago to do a clay workshop and we got together then to catch up.  Also, she had always been on my radar since the '93 retrospective, I was aware that she had continued to grow as an artist and that her work had evolved significantly.  It would be interesting to find out more.
There was also a personal reason for taking on the assignment.  Ann was grieving the unexpected death of her husband.  I remember Gwilym as tall and athletic.  As a geologist he really enjoyed Newfoundland and its lunar landscape.  Gwilym could have stepped out of Chariots of Fire.  When he went in for a knee replacement no one expected him to die, least of all Ann.  I wanted to be a part of Ann's healing after such a heart-breaking loss.  Contributing to the success of this show would be meaningful.  Not just another gig.
The professional in me was curious to discover what needed to be said about Ann Roberts the sculptor that had not been said before.  My contribution was a more Jungian interpretation of Ann's work with a dash of Tantra thrown in.  See both Ann's Floating Woman pictured above and her Fish Encounter below.  Ann's female figures, to me, are not just about women but about the feminine principle.  The woman and fish are, to me, like ying and yang or a union of female and male energies. 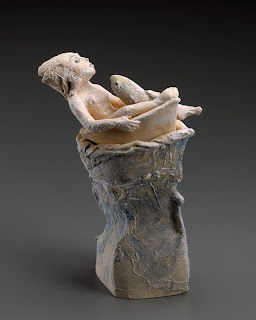 I also took the opportunity to reach out to Aggie Beynon and Jonathon Bancroft Snell who had represented Ann's work commercially to learn about the perceptions of the public and Ann's collectors.  Dealers are always worth talking to in my experience.  They have a wonderful vantage point and oodles of contextual experience.  Finally, I knew I was supposed to be doing this assignment when on early Saturday morning I walked in to my son's Christmas concert in downtown St. John's and was introduced by my husband to Jane and Tony Urquhart.  Jane is the novelist (of course) and her (Order of Canada/ painter) husband was there.  They were visiting St. John's and attending their granddaughter's concert.  Tony Urquhart had been Ann Roberts' colleague at the University of Waterloo, Fine Arts Department for decades.  He gave me a lovely quote for the essay.  I could not have made it happen any better.
Here's the link to the Clay & Glass:
http://www.theclayandglass.ca/
Posted by gloria at 12:41 No comments:

Email ThisBlogThis!Share to TwitterShare to FacebookShare to Pinterest
Labels: Ann Roberts: with both fear and intrepid enthusiasm

Larger Than Life, Exhibition in Print 2011 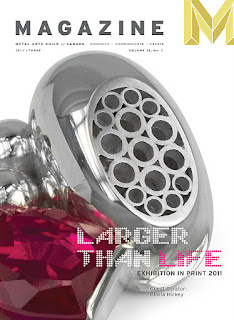 Let's start with a confession:
I am drawn to intensity like a moth to a flame.  And I don't think I am alone.  Today's society finds something particularly resonant in the notion of "living large".  We are attracted to stories of the little guy who makes it big, celebrities, the royal family, disasters and triumphs.  Judges on televised competitions urge talented contestants to "leave their hearts on the stage" and to give it all they've got.  Audiences want it big and they want it now.
This was my opening paragraph for a project that rolled off the presses just before Christmas.  It is the Metal Arts Guild of Canada's Exhibition in Print 2011.  This gig was a blast.  I developed a menu of show themes for a call for entry.  The board of directors of MAGC were my focus group and helped me figure out what would best appeal to their members.  We received 165 entries and I was told to cut that down to an elite 21 entries that would be published.  That's a rejection rate of 87%.
During the months leading up to the selection period I indulged in research.  I read Susan Adam's biography of Vivaldi because he is associated with the advent of the virtuoso performer, the individual standing apart from the crowd and of course Italian opera. - Both instances of "larger than life" art forms.  I was in the U.K. for the summer so I feasted on the V&A both its jewellery and metal collections but also studying the jewellery on the Buddhas and other statuary.  It was an excuse to revisit the royal jewels at the Tower of London and to romp through contemporary commercial galleries.  I visited cathedrals and took special note of their ceremonial vessels.  In other words, I had a great deal of fun in the name of research.
When the fall rolled around it was time to do the curatorial work: selecting work and writing the essay.  Mary McIntyre and Dianne Karg Baron kept me on course and edited the essay.  They were a delight to work with and I really came away with the impression that MAGC was serious about upping its game.
Were there any surprises with the job?  What did I learn? I was struck by how the theme was interpreted by the members.  And the 4 prizewinners demonstrate this.  First place was Paul McClure for his brooch (shown on the cover) that was about the microscopic world that lies beneath our skin.  Talk about potent essence.  Small object: mega impact.  Second prize went to Claudio Pino - my Vivaldi in metal, ornament on ornament, grace notes galore.  Third prize went to Karin Jones for her ornamented set of farm tools using a medieval technique originally intended for the testosterone world of royal amour.  And the student award went to Heba Kandil for her Apparatus for Revolution, which adorns the fist of resistance in the face of social injustice.  Big issues, big ideas with lots of intellectual meat for me to critically engage with.
To see pictures of the prize winning entries, check out the Metal Arts Guild website: http://www.metalartsguild.ca/
Posted by gloria at 13:34 No comments:

Don Porcella at the Museum of Art & Design, NYC 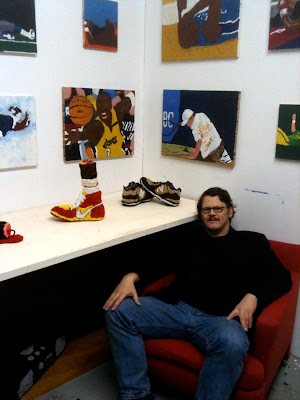 On Thursday December 29, 2011 I was in New York City.  After we visited the Tenement Museum on the Lower East Side (for my husband) and Nintendo World at the Rockefeller Center (for my son) we trundled off to the Museum of Art & Design (for me!).  There were three noteworthy exhibitions: an exhibit of Japanese contemporary craft drawn from the permanent collection, a visiting exhibit of new Korean craft-based art and an exhibit that traced the evolution of Modernism in American craft.
The Japanese group show was drop-dead gorgeous yet lyrical.  The elegant baskets and wabi-sabi pots are "timeless" if they suit your taste and "dated" if they don't.  (Personally, I think they are beautiful.) The Korean group show was edgy, energetic and opinionated with digital flourishes, uses of recycled material such as an impressive Minotaur from car tires, and huge classical vases made from soap instead of ceramics.
The standout in the Modernist show was not the objects themselves –say Sheila Hick's textiles or Sam Maloof's furniture–but an interactive timeline that situated the objects in a variety of contexts whether it was social, like the advent of "the Pill", or cultural like the Beatle's music, or political like the Vietnam War.  Now, we get the real benefit of the retrospective gaze.
The highlight of our trip to the MAD was a visit to the open studio, where Don Porcella had just started a residency.  Don Porcella works with pipe cleaners to create life-sized sculptures.  His "art dealer" kept us company with its Crayola palette and cozy plush animal textures.  On the table were sample segments so we could see how Porcella uses chicken wire as an armature to make large scale and volume possible.  He explained to me that he like the ready-made quality of working with pipe cleaners.  I replied that they had a pop culture feel and that sent him reaching for his portfolio.  Porcella showed me images of some of his other sculptures including his versions of Warhol's Brillo Box and Duchamp's urinal/fountain.  In one sculpture they were being "burnt" on a pipe cleaner pyre.  In another, Porcella had interpreted the famous Australopithecus Lucy as a graffiti artist cave painter complete with spray cans.
I glanced at Porcella's resume and noticed that he had two degrees in painting and asked about the move from 2D to 3D.  He explained that he had worked in encaustic and showed me images from that time period.  Guess what?  The paintings had the same palette as the pipe cleaners.  Porcella's first encaustic creations were made from Crayola crayons.  Earlier in the conversation, Porcella had also mentioned his mother was a weaver.  All the pieces fell into place: ready-mades, pop culture, the accessibility of pipe cleaners for the viewer, mom the weaver as a role figure, and paintings that had taken on 3D shape.  Don Porcella and I smiled broadly at each other and as my family left his studio he chased out the door to offer my son a multicolored handful of pipe cleaners.
I look forward to seeing more of Porcella's sculpture.  It is irreverent but positive.  In contrast to the exhibits I had just seen at MAD, Porcella's work did not have the preciousness of the Japanese work nor the self-importance and preoccupation with materiality and technique of the Korean work. 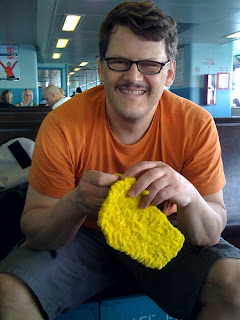 Don weaving with pipe cleaners - photo courtesy of the artist.
Posted by gloria at 08:00 No comments: