The Craft Council Gallery in St. John's presents two women's stories in textile art and metal art.  Working independently, textile artist Rachel Ryan and metal artist Michelle Chaulk each draw from their life experiences as contemporary women as the basis for their art.  The stories they tell are their own but they have a resonance across generations and social strata.  Together they intertwine to form something of a feminist cautionary tale.

Michelle Chaulk explains, "Over the last few years, most of my work has centered around humanitarian and social issues.  I've recently been inspired by a revitalization in the women's movement specifically in the area of equal work for equal pay.  I spent several years after graduating from the Nova Scotia College of Art and Design in the jewelry industry."  Her day-to-day experience was hardly one of wage equity.  She describes the frustration of asking for the same wages as her male colleagues at the jewelry bench.  "I would be laughed at for asking for the same starting salary as the men…and they had less experience than I did.  So, I would go home broke as usual."

Chaulk has dubbed this wage inequity and the body of work it has inspired as "The Game".  The word game is ripe with irony.  Understood as a noun it refers to an activity governed by rules that judge skill, strength and perhaps luck.  Being "game for anything", the adjective describes a bold individual ready for a challenge.  However, taken as a verb, game can have more sinister connotations.  Instead of something that can be played fairly, game suggests manipulation and the unscrupulous, as in "it is easy for big companies to game the system."  All three uses of the word game have a consistent feature:  games are artificial but have a quantifiable outcome–like a score or money.

Money is inevitable in a discussion of wage equity.  But in the art of Michelle Chaulk it takes on multiple functions.  She uses currency in the creation of her wearable art.  Look carefully at the card-shaped pendants and you will notice that the coins with the male heads always have a higher value or denomination.  Female-headed coins fulfill the same aesthetic function, as would a gem or precious item, but always with a lower value.  These are three-dimensional and double-sided.  They are displayed on armatures also crafted by Chaulk, which are in effect, miniature ladders.  You can decide who is winning the game of "getting ahead" as your eyes climb the ladder.

Rachel Ryan's body of work is titled "Holding Patterns" and it echoes another dilemma familiar to women, that of putting your life "on hold" while meeting the needs of a family.  Ryan is a daughter who has mourned the loss of her mother, became an ex-military wife, and is a mother to a young son, with whom she lives on an airbase in Annapolis Valley.  The wall-mounted, autobiographical textile art on display is drawn from over eight tumultuous years of change.  She states," I am keenly aware of the sensation of living in a “holding pattern”. I balance the desire for escape and excitement with the awareness of the need to stay grounded and stable."

Ryan's mini-retrospective blurs the boundaries between quilting and textile art.  It progresses from disparate pieces and tangled threads to a composed, lyrical world that is nearly ephemeral.  It reflects not only her experiences and emotions but also her conceptual growth.  Ryan concludes, "In the past I have been thrown off kilter by the swiftly changing tides; I have now learned how to flow with those changes rather than fight them. I have also learned to stop asking for permission to land; I have landed."

The domestic act of waiting has special significance for military families as well as those associated with the fishery.  For centuries, it was the woman's role to not only work alongside the men but to keep the home fires burning and constant while the men were away at war or up the coast, or in the woods, or on ice. Ryan says that she considers "these feelings and ideas in my work, and think about how it links me to other women present and past."  Then as now, these women occupied themselves with stitching as they waited–cutting apart, sewing together and making something that would last another day.  Holding home and family together with the quiet act of repair. 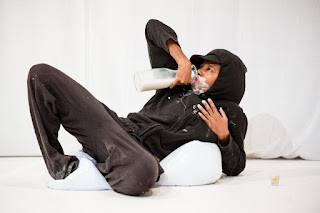 The first words to escape my lips after Dana Michel took her final bow was, "gob smacked, we've been gob smacked!"  The audience was on its feet giving an unequivocal standing ovation.  For an entire performance the audience had not been able to take its eyes off of Michel.  But what had we seen? Dana Michel took us on a riveting journey into identity and otherness.

Dana Michel not so much performs for the audience, as she demands that it bears witness.  Episodes of movement and stillness are drawn out, pregnant with intention.  You could feel the audience squirm and frown in concentration as Michel made her entrance as a struggling, palsied individual.  This persona's gait stuttered and turned inward.  Next, she is smearing her dark coloured face with white cream and sharing a socially savvy observation, which upends the audience's expectations.  As an audience member, your feet never really touch the bottom in security.  She is the kind of performer that operates on a taut high wire without a safety net. 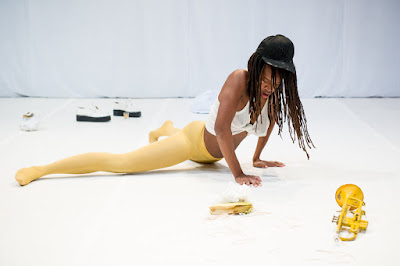 Michel is a dance maker of disturbing skill and visceral ability.  We watch enthralled as one character after another emerges from her creative cocoon as she overlays everyday movements with character-rich vocalizations and ingenious props.  Michel may ritualistically scatter the stage with the detritus of daily life:  toothpicks, kitchenware or elastic bands.  Snatches of narrative from recognizable, dare we say "civilized" events– like a weather forecast or a cooking program– are rendered absurd.  A handful of blonde wig is swung about as if in benediction or interrogation.  Dana Michel delves into herself and into us with both pain and humour.

Thankfully, Michel set aside her career in accounting and marketing and went to that audition at Concordia's dance program.  She emerged with a BFA in 2006 and has gone on to become a dance virtuoso that has been setting audiences free ever since. 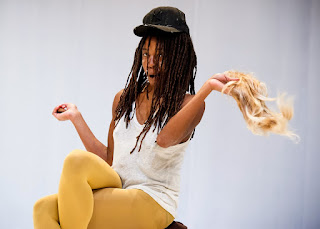 Email ThisBlogThis!Share to TwitterShare to FacebookShare to Pinterest
Labels: 2017 Festival of New Dance

The stage is a simple white square space defined on the floor.  There is an absence of colour and props.  The drama of Solitudes Duo is in the body of the dancers: simple pairs, masculine and feminine, sometimes mixed, who are themselves stripped down to trunks and occasionally t-shirts.  There is something of the everyman about this pared down production and the universality of relationships. 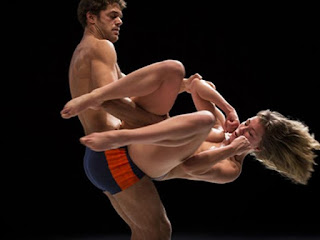 It all starts with the stylized circling of hips, a contemporary, choreographed mating call.  Bodies brush up against each other, a tentative but purposeful entering of each other's space.  Quick, articulate gestures keep time to the insistent rhythms of a Bach harpsichord composition.  There is concatenation as the gestures link together to form movements that express states of emotional being and compatible character.  We see the birth of a couple as the individuals interconnect to form a single entity.  And then often through a series of dramatic lifts and supporting moves we see things come undone, defeated by gravity and human expectations.  Frequently, there are memorable slow descents filled with tension.

Bodies overlap on the floor, intertwine, struggle and release.  This is the push and pull of relationships that is at times serene and others frantic and even humorous.  But it is always sensual.  The music shifts into a moody, pop-rock ballad. 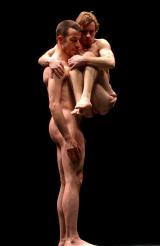 Some of the passages are dramatically acrobatic others gentle.  Yet, despite the great clusters of interconnected limbs, the dependence, trust and balance of one dancer's weight upon the other there is surprisingly little eye contact, which might explain the solitudes in Solitudes Duo.
Posted by gloria at 08:08 No comments:

Email ThisBlogThis!Share to TwitterShare to FacebookShare to Pinterest
Labels: Festival of New Dance 2017

Last Saturday evening at the Masonic Terrace, St. John's was treated to a performance of flamenco music and dance that was nothing short of a transfusion of primal energy.  Forget the lighter, milder versions of flamenco that many of us have experienced in folkloric cafes, popular with tourists, in Spain.  Andrea Williams and Michelle Harding from Vancouver's Raices y Alas Flamenco dig deep into the authentic and share with us all the Andalusian roots that have fed Flamenco.

One of the joys of the Saturday performance is that we had a full serving of all the vibrant components of flamenco:  live vocals by Sean Harris (cante), Manny Companjen on guitar, Anthony Tucker on a beat box (percussion) and Christina Penney clapping (palmas y baile).  The vocals of Harris had that unmistakable heart-felt wail that carry us from soaring joy to the depths of despair–and that is the emotional torque so characteristic of true flamenco.  That pared-down cry from the heart is an indication of the Jewish and Arab flavours of flamenco and surely takes us right back to the origins of song itself.  All the other components fall in percussive and rhythmic place and the dancers inhabit the music with every cell they possess.

Williams and Harding have a clearly defined vocabulary of dance gestures and communication flows between them.  It is as if they suck the music up through the soles of the feet and without restraint or convention it percolates through their bodies and back to the musicians.  The word spontaneous seems more apt than improvisation.  Their graceful hands circle and air borne arms undulate as if recalling the gypsies' spice route of migration from India to Andalusia.  And all the delicious moments of contrast:  a ruffled skirt goes from sensual to seething, curling lines give way to the jut of an elbow or flat palm.  This is so much more than the attitude-filled dance moves of a pair of dueling dancers; this is skill that has become charisma. 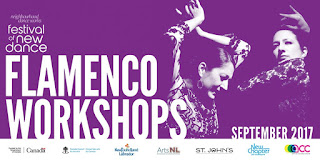 From St. John's to Corner Brook, our local dancers who got to participate in the Flamenco Residency had a rare opportunity to experience professional classes, one-on-one mentorship and community performances with the featured dancers of Raice y Alas.  No doubt, "Olé!" could be heard all the way from St. John's to Gander and Corner Brook.


Watch for the October 21st showing of the flamenco documentary La Chana (see the link above for the trailer) at the St. John's International Woman's Film Festival, accompanied by a curtain raiser performance with local flamenco dancer Christina Penney and musician Sean Harris.
Posted by gloria at 09:41 No comments: