CraftED Upstarts on the Make

Well, last week was the official launch of Crafted, Upstarts on the Make, so I can now offer an opinion on the Craft Council's latest publication.  It has a snazzy, energetic graphic design and Bennett's fresh take on studio photography in keeping with the subject: ten emerging talents on the Newfoundland and Labrador craft scene.  I really liked the tone Executive Director, Anne Manuel hit with her introduction.  In essence, she says to the featured newcomers and other new arrivals: "consider this book your welcome mat."  It is my opinion that craft today is struggling to keep all the good things of the past – that it is an alternative to industrialism for example– while remaining open to the fast paced changes that unfold daily in society.  It is easy to see the two sides of tradition and innovation in opposition to each other but it isn't especially productive, so I think it is strategic and healthy that Anne Manuel is extending the welcome mat.  This will mean that the craft community will remain supportive and can look forward to the future with optimism. 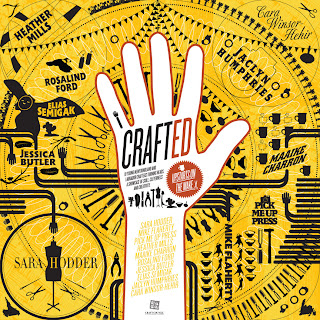 Maegan Black is adept in her writing of the profiles of the makers.  I particularly liked her analogies that situate individual practices in meaningful contexts.  For example, in Rosalind Ford's case she draws a parallel between Ford's practices as a scientist and maker, "Very much as she did when she was catching, tagging and releasing birds back into the wild.  Rosalind captures an idea, makes her mark through creation and sends that vision out into the world. … her artistic vision takes flight." And in Elias Semigak's case Black brings forward the theme of reciprocity and "paying it forward".  When you consider that Semigak was only born in 1980 but already is creating opportunity and employment with his own apprentice despite less than ideal beginnings you have to be impressed.

Black's profiles are useful not only in understanding the creativity of the individuals in the spotlight but in understanding craft practice as it exists today in general.  She touches on the difficulty of being self-taught and how Maaike Charron used her experience as an academic and her skills as a researcher to become a proficient potter.  I also think Black is insightful when she notes that Charron is a methodical thinker with a noticeable playful streak.  Whether it is how Heather Mills balances commission work with her own signature style or how Pick-Me-Up Press grew into its own support network, all of the individual features provide lessons on how successful young makers problem solve.  I believe that you have to face a problem to solve it.  Writing about craft has often been too romantic or overly positive.  I give Black credit for not being a cheerleader and instead writing something that is sensitive and useful.

After the individual profiles is a section that is more of a how-to with information about practical issues like exhibition proposals and resource listings.  I was involved with this section so it isn't fair for me to comment on it.  I will conclude with a list of the names of the featured makers, to your general applause:  Rosalind Ford, Elias Semigak, Maaike Charron, Pick-Me-Up Press, Jaclyn Humphries, Heather Mills, Sara Hodder, Jessica Butler, Cara Winsor Hehir, Michael Flaherty.

Here's a link to the Craft Council of NL if you'd like to learn more:  http://www.craftcouncil.nl.ca/news/media-release-crafted-book-launch-showcases-young-/
Posted by gloria at 12:47 No comments:

Email ThisBlogThis!Share to TwitterShare to FacebookShare to Pinterest
Labels: Energetic and useful read


This isn't exactly fresh news but I have come across several folks in the professional craft community on the East Coast who weren't aware that the Bronfman had been awarded and that the worthy recipient is Greg Payce.  My heart did a little jump for joy when I learned this news a few weeks back and I sent a note of congratulations to Greg with the subject heading "you deserve it".  I told him that his work had hit such a consistently high standard over the years that I thought he really was a leader of the pack.  Or in more poetic terms,

“In his hands, the seemingly prosaic world of pottery takes on aspects of the illusionistic, the cinematic, the virtual..." – Steve Heinemann, Ceramist (nominator)

If you'd like to check out the Canada Council's website about the Governor General Awards and Greg Payce's in particular go to:
http://ggavma.canadacouncil.ca/en/Archive/2013/Winners/GregPayce.aspx
There are some really worthwhile videos on the site too that give you a crash course in the wonders of Payce's stellar ceramics.

I couldn't get over how the years have past when I read that
"For 43 years, Greg Payce has been shaping his experiences and passions at the potter’s wheel. He pulls from design, film, photography, philosophy, history – all while reinforcing his connection to fellow potters through the ages.  He has been passing on this connection to the countless students he has influenced over his 24 years as an instructor in the ceramics program at the Alberta College of Art and Design."

Dear me, 43 years! (I must really be approaching venerable old fart status myself!)  Mind you the Bronfman is a lifetime achievement award.  I appreciate how humble Payce is when he responded "mostly i am glad the fuss is dieing down a bit. i am not that public a person, and really just want to get back in the studio and make things."

I am looking forward to jury duty with Greg Payce and my other esteemed colleagues for the Burlington Arts Centre HOT MUD exhibition.

Get Acquainted with that rare human species: the curator

Yesterday I had the distinct pleasure of spending 3+ hours working with the artisanal gang at The Plantation here in St. John's, NL.  It was Business Mondays, a series that is custom tailored to give the craftspeople and artists in the workshops there a taste of the cultural industries that are especially relevant to their practices.  I was invited to speak on my curatorial practice and I jumped at the chance. 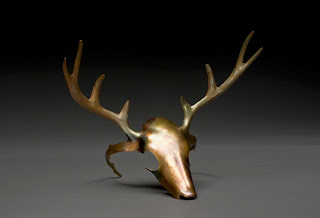 This is Mary McIntyre's Deer Mask that was featured in my Larger Than Life exhibition.

I have written in other places, and mentioned in interviews, that I think my father's work and habits as a detective influenced my observational skills and style of curating.  I have realized that was true of my interview style but until recently didn't appreciate how much it informs how I design exhibitions.  If I could give one thing to the gallery-going public it would be more confidence and skill as viewers.  Not just looking but really seeing…it wouldn't be art history, or craft techniques, or specialized knowledge about obscure things.  I'd say to them: relax, take you time, think about what you are looking, why are things the way they are?  Go ahead, ask questions!

While I was preparing for the session I was reflecting on my past as an artist's model.  My mother had posed a challenge for me as a kid:  if I wanted to continue with painting classes, I had to find a way to pay for it.  And that was why I started to model.  It was a bit of a hoot as a grade school student to go from my classes with the nuns, and the uniforms and saying the rosary on our knees in the afternoon and then to skip down the street, take off said uniform and get up on a velvet covered pedestal.  It was while I was modelling that I started to watch, carefully, how artists worked.  And I became fascinated. Why did they choose the colours they did?  I noticed habits, decisions, sequences, etc.  Gradually, I discovered that I was content to watch people create art.  I didn't need to do it myself.  It wasn't an itch I needed to scratch.  But I did want to know more about their process and the series of decisions that informed the artistic process.  I was hooked.


I believe that on some level that's when I became a curator.  When I was 15 years old I started publishing as a journalist in the Suburban newspaper.  It was a by product of winning a city-wide writing competition for highschool students. That summer I did an internship with CBC TV.  This was followed by a qualifying university year at Carleton University's journalism program and eventually a stint of a four years as the Entertainments Editor of the Loyola newspaper.  Not surprisingly, I became an art critic and reviewer.