Last night I was at Turkey Joe's on George Street to attend a fundraiser to help a friend and filmmaker by the name of Tamara Segura.  Although the location was familiar, and it wasn't my first salsa party, everything contributed to the impression that I was in another country.  The D.J., the live music and the crowded dance floor so early in the evening.  For one night I would be transported to Tamara Segura's native Cuba and my Spanish would improve.  The entire dance floor was occupied by couples of all ages; people who had clearly grown up moving instinctively to the latin rhythms.  Men danced with smiles on their faces and their eyes half closed.  Women moved with easy, fluid grace.  As the evening wore on, virtually no one sat down and we all started to sweat and smile some more… 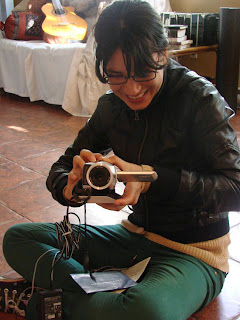 Tamara Segura has been in Canada for about ten years.  Her bubbling enthusiasm does not lead you to guess at the depth of her ideas or her talents.  I first came to know her through our common backyard.  I learned we were both writers.  She was working on a filmscript and I on a book chapter.  We would laugh at our similar rituals, like sitting down at the keyboard in our pijamas before we'd lose those ideas we'd wake up thinking.  We both had the habit of waving our hands around when we'd get animated talking…

My first taste of Tamara as film maker was Fireflies, which was also shown last night at the fundraiser.  It is a short film about a mother –hardworking, professional, stressed, probably single–and her son.  The son comforts her at a crucial moment in a way that only children can. I don't want to spoil the plot but suffice it say that as a mother I can vouch for the startling veracity of the film.  I was really struck by both its gentleness and its economy.  Segura captured both the perspective of the child and the mother admirably.

I am proud to say that Tamara Segura has recently won recognition with a significant award –the 2014 RBC Michelle Jackson Emerging Filmmaker Award–and that she made a grand splash at the most recent Women's Film Festival.  There is a great interview written about her in the Festival blog that I invite you to check out:http://www.signalblog.ca/

It will also give you a taste of Segura's upcoming film, which will be make here in Newfoundland.  It will be called, "Before the War".