The summer novel you will both love and hate 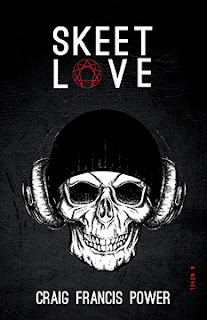 Craig Francis Power graciously agreed to a Q&A with me about his recent and third novel Skeet Love, which publisher Breakwater describes as, "an uber-cool drug and sex-fuelled critique of the world we think we know."  The story revolves around a love-threesome of Shane, Nina and Brit.

GH:  I was very taken by your editor, James Langer's comments at the launch, in particular that when he got the manuscript he thought it was a dystopian novel but that by the time it was in print (i.e. post Trump) it had taken on an unsettling reality.  I agree wholeheartedly and would put Margaret Atwood's The Handmaid's Tale in the same category.  I think this is the basis for my love/hate relationship with your book.  Do comment!
CFP:  It’s funny because someone wrote me to say they had just finished Skeet Love in a weekend and the only other book they’d done that with was The Handmaid’s Tale, which they hated and admired at the same time, so that’s a compliment I guess.

Watching the primaries and the election in the States while I was working on the book was a strange experience in that the way things unfolded had an inevitable and nightmarish quality to them, but it did not strike me as particularly surprising that Trump won, or that Bernie Sanders was screwed out of his party’s nomination, or that Clinton ran a campaign that was virtually free of any kind of policy that would appeal to working or middle class voters.

I think the election showed a lot of the justified rage people have toward the political elite in the States and that was something that happened to be coming across in what I was writing. I think there’s a similar feeling in Canada as well, where you have this neo-liberal selling a fuck load of armaments to the Saudis and then saying in this smug kinda way that there won’t be any electoral reform in Canada because everyone’s so happy with the current government as opposed to the Harper regime—all the while paying lip service to being socially progressive.

While Shane, Nina and Brit are young people, and lead these sort of fucked up lives, they aren’t stupid, and this sham of a democracy is something they can see right through. Shane’s take on conspiracies doesn’t really seem that far-fetched given what we’ve learned from Snowden, Chelsea Manning, and WikiLeaks. It is true that there are powerful forces working counter to the interests of the working-class, but it’s not what people like Alex Jones and David Icke describe; it’s more COINTELPRO, and that realization for Shane is something I felt I needed to explore.

GH:  My daily research life and your novel collided,  I had just read the section about violence with a hammer and then came across hammer-violence in an interview.  Next, I'm reading in the Guardian about sex robots as a growing industry in the U.K. (now that dolls can be invested with A.I.) and I come across Shane's rant about clones.  No wonder, I started having nightmares.
CFP:  There’s an obvious homage to Philip K. Dick in Skeet Love, and that notion of the clone or replicant is at the heart of it, and at the heart of Shane’s paranoia for that matter. Incidentally, “skin job” (how Shane’s Dad refers to his taxidermied animals) is lifted from the movie Bladerunner, and is a colloquial term for replicant. Part of what I was interested in as someone who reads and writes books was my feeling that these fictional characters who take up so much of my time often are more dear to me than real-life people, and the question of whether the fact that these characters are fictional lessens somehow the meaning of my love for them/real people. Thus, the letters from Brit.

GH:  I couldn't make up my mind if the writing was a form of exorcism or indulgence.
CFP:  Both. 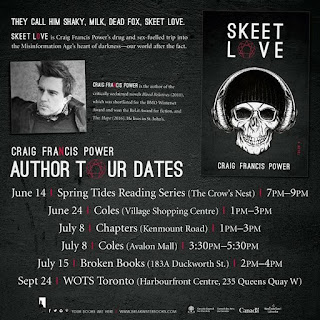 GH:   The other "young" writer with an attraction for the "dark" side is Joel Thomas Hynes but I don't know if I am off the mark in saying this:  Joel's territory is around the bay and yours is urban.  Joel is trying for primal and you are more stylish (and I'd say sophisticated).  Share your reaction please.
CFP:  I think there are similarities in our work, though I’ve only read Down To The Dirt, so it’s tough for me to say.

I remember reading a Ray Guy blurb for that book in which he says something to the effect that Joel’s work was an antidote to the many embroidered fantasies about Newfoundland culture with which we’ve become so enamoured, or something like that, but I’m not a fan of replacing one fantasy with another, even if the things described are “grittier” or “darker” or seem more truthful simply because it is grittier or darker, just for the sake of doing so.

Honestly, some character getting bombed at a dive in St. John’s and fucking his cousin or whatever isn’t much compared to what Angela Carter, or Ta Nahisi Coates, or even Margaret Atwood has going on, so I wouldn’t consider my work particularly dark compared to those.

GH:  Do you think "the angry young man" label goes against you?  I am concerned that older readers will not give the book its due citing "generational" differences.
CFP:  As a white, straight (?), cis male, I have very little reason to be angry.

And given what I write about, and given that the readers of literary fiction are predominantly middle-class, white, Baby Boomer women with plenty of leisure time, I’m not expecting to be catapulted into literary superstardom anytime soon, so those differences, if they exist, are not generational, but class based.

Many of my characters are angry, and rightfully so. As someone who comes from a working-class background, I’m drawn to those stories, and drawn to representing the beauty and the tragedy of those lives without romanticizing them.  Unlike Shane, I’m no tourist, who’s a phone call away to Daddy for help when the shit hits the fan.

GH:  I kept searching for the music in the dialogue and narrative.  Can you comment on the influence of rap on the rhythms and vocabulary?
CFP:  Rap is the filter through which the characters speak, but their story is almost classic Canadian. I was thinking a lot about Atwood’s examination of the three generational narrative in CanLit (from Survival I think), and was exploring how it would manifest in a more contemporary or near future setting. 8 Mile was a big influence, and watching the movie and reading that script, I thought how wholesome it is—I was bored with it actually.

GH:  Actually, the example of rap as a way of understanding the novel intrigues me.  Lots of people like rap but don't condone violence, guns, drug culture, perhaps they tap into the discontent or anger.  Is that what they share in –that could make Skeet Love a book "for our times"…?
CFP:  Yes.

GH:  Something in the novel confused me as a reader and you are welcome to tell me I'm just stunned.  I found the "voices" of the three central characters so similar that I had to check who was speaking.
CFP:  There is def some overlap, but I wanted Shane in particular to speak as though he’d just lifted things from Urban Dictionary, while Nina and Brit are more organic and slightly less self-conscious.

GH: I was curious about the convention of the letters to C.F.  I like the emotional truth of them but how did you intend them?  Was it an ironic device?
CFP:  With the letters, I was interested in some of the things Shane mentions when talking about quantum mechanics—in particular the notions of entanglement, superposition, and the measurement problem. Entanglement I find especially fascinating, and is an apt metaphor for the relationship between an author and their characters. To a degree, Skeet Love is a book about art and the artistic process—all of the characters are explicitly creative—and I think that Brit’s final dilemma at the end of the novel is representative of how an artist can proceed (or not) in the face of an overwhelmingly brutal patriarchal culture.

I also find appealing the idea of making myself vulnerable in what I write—if I’m in a position to explore so intimately the lives of Shane, Nina and Brit, shouldn’t I be at risk in some way outside beyond professionally?