The seventeenth season of the Tuckamore Festival has already begun to fulfill its tag-line mandate "Chamber music to Inspire" with its first few days of programming.  Opening night featured the esteemed talent of André Laplante on piano, who is often "hailed as one of the great romantic virtuosos" as stated in the program notes.  Now, whether you are up on your music history and are conversant in your terminology or romantic means something else to you, Laplante made it all come true.  He delivered.

The audience warmly responded to his opening interpretation of Haydn's Sonata in E Flat Major and generously showered Laplante with standing ovations even before the intermission.  The emotional connection he obviously shares with the music is palpable and as I overheard one audience member comment, "that Laplante is some vigorous". 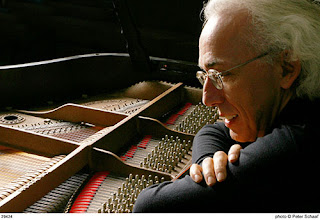 Next on the program was the Chopin Sonata No. 2 in B Flat Minor with its signature somber funeral march–not what the audience expected as the piece that would take us into an intermission.  But Laplante played it with fresh intentions and surprising clarity that knocked any clichés out of a composition that has morphed its way into our cultural fabric in everything ranging from soundtracks for cartoons to advertising.  Laplante's version gave me shivers, especially the Finale: Presto. Sotto voce e legato.

Speaking of "sotto voce" there were a lot of murmurs during intermission about André Laplante's subvocalizing while playing.  Glenn Gould's name was frequently mentioned.  This is when I resolved to attend the next day's After the Music: Concert Chat and Coffee at the Rocket Bakery to learn more about the audience response.

Seven outspoken women gathered around a round table at The Rocket Café the next day and dived into a lively discussion about André Laplante's performance.  Some had attended his masterclass earlier in the morning; we varied in background from those with years of keyboard experience and careers in music to aficionados (like myself) without formal training.  It was a good cross section and provided lots of friendly debate.  I'd say that whether you believed that sub vocalizing is a distraction or an access point into the internal world of the performer (the music instead their head) you would have learned something.  There was intense conversation about pedaling, graceful hand flourishes, sustained notes, clipped notes and the variables that a concert pianist has to deal with on tour.  My favourite observation was from one of our participants who exclaimed, "don't you think there should be something called a 'man-piano'?"  Everyone was in agreement that André Laplante had played the concluding two Liszt compositions in the performance with a rare integrity, a seamless relationship between man, piano and music.

Gloria Hickey
Posted by gloria at 08:42