The Trend of Adult Colouring Books 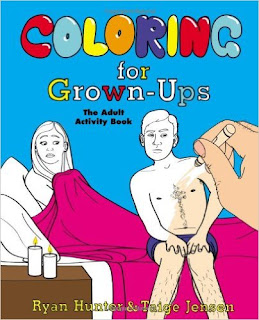 One of the projects that have recently preoccupied my time is an artists' adult colouring book as a fundraiser for Eastern Edge Gallery.  This idea came from the ever-resourceful Mary MacDonald and as soon as the Board of Directors heard about it we were all in agreement.  The difficulty was that we needed to pull it together in less than two weeks so that it would dovetail with an auction.  I volunteered; yes I really do need to get my head checked.  But, we did it with some serious team effort!

One of the beauties of an artist-run centre is that you are sitting on a powder keg of talent.  It was not difficult to find artists willing to trade a drawing for a year's membership.  And Louis Atkinson from the board came up with the idea of making funky crayons to go with the book.  He melted down crayons into moulds to form rainbow colouring tools in the shape of hearts, stars and skulls.

The reason why I share this project with you is that I became aware that adult colouring books are a trend.  Aside from the latest novelty retail item I suspect the trend says something about us as a society and of course that's where Gloria gets excited.  While working on the book for Eastern Edge I started noticing colouring books for adults in gift shops, bookstores and even (I was told) Wal-Mart.  A little sleuthing on the net and I realized that colouring books for adults were a retail avalanche in the publishing sector.

I find tracking advertising and marketing very rewarding, as these tend to be very strong indicators of the social significance of an object or activity.  In other words, what were they really selling?  What were consumers hoping to attain with the purchase of a colouring book?  Usually, you look for a benefit or a need met.  At first glance, it was relaxation.  I noticed the word "calm" in titles.  So, this was one more relaxing hobby that didn't really require skills.  Then came "creativity" as colouring books were touted to stimulate your artistic side - using that other side of your brain.  This surprised me a little because I thought colouring inside the lines was the very definition of conformity.  (However, some of the most interesting books leave pregnant blank spaces to lure you into creative play.)  It was also associated with the adult reclaiming of childhood activities.

Next, I started thinking about the angle…there's always an angle to tweak our interest.  So, you will find colouring books that are themed to sell to those with a specific interest in a book, like the Secret Garden, or a pop culture theme like Star Wars, the Game of Thrones or even a twist on Christianity - like martyrdom!  Get those extra red crayons ready.  There are also ways of differentiating adult colouring books through content.  I found one book, Colouring for Grownups with sardonic activity pages that ask you to do things like tell the hipster from the homeless. 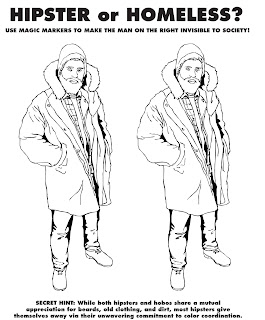 Some of the largest selling titles in publishing according to Amazon and other platforms have been colouring books.  How curious that the most recent saviour of the publishing world will be one almost devoid of words.
Posted by gloria at 08:44

Email ThisBlogThis!Share to TwitterShare to FacebookShare to Pinterest
Labels: Do you colour inside the lines?