This Saturday I allowed myself to be whisked away to Tors Cove, where I was expecting to enjoy a relaxing day "around the bay".  No such chance!   It proved to be a day of intense conversation and discovery as I bounced between gallery and studios.  The fish plant may be closed but the cultural industries in Tors Cove are going full tilt.

Celebrating its tenth anniversary this year is Five Island Art Gallery.  Knowing that Frances Ennis and Bill Coultas were involved, I expected to see some hooked mats and photography but I was not prepared for an entire schoolhouse full of paintings!  It seemed "all the familiar suspects" were there, plus many names I did not recognize even after twenty years of looking at art in this province.  The bulk of the painting was representational and colourful but the full gamut of price range was covered from modestly priced watercolours to large works that would represent a significant investment in anyone's budget.

Catherine McCausland has opened her home studio, BalleyCatter Crafts, to the public this summer.  I think of her as a textile artist extraordinare, someone I can count on to create small whimsies that I can wear on my wrist or decorate a Christmas tree with as well as create installation-sized work when the theme merits.  My big surprise was that she was unveiling the product of five years of intense experimentation with felting.  McCausland has created felted pieces for the wall that evoke the watery worlds of Monet.  However, where Monet portrayed Giverny, Catherine studies the Barrens and the rolling hills and sparkling ocean of her home cove. 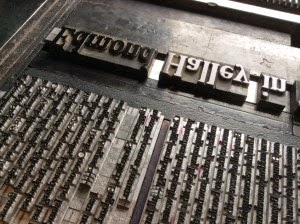 Completing the day for me was a visit with Marnie Parsons at Running The Goat Printshop.  I recognized the drawers of typeface that I love and the familiar sight of the sturdy letterpress that I had originally fallen in love with in her "townie" location but her spanking new set up includes an impressive Heidelberg–The Prince of the Presses.  I confess I feared for Marnie's long flowing skirt when I saw those vacuum suckers and wind mill blade in action.

These three venues are collaboratively hosting a special day of  craft, poetry and family fun on August 2nd to mark the 314th anniversary of the arrival of Sir Edmond Halley (the astronomer and geophysicist for whom Halley’s comet was named) in Tors Cove. At the end of a prolonged scientific voyage, Halley came to Tors Cove looking for fresh water and wood, and was greeted with gunfire. Apparently, local fishermen mistook his vessel for a pirate ship. A rude welcome, whatever way it was.
http://runningthegoat.com/halley-day-in-tors-cove/

Schedule for the day: