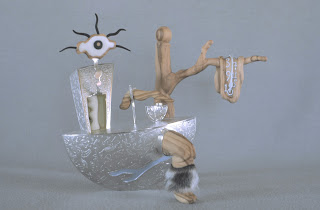 The Enigmas of a teapot by Michael Massie, 2003, which was made for a collector who shared Michael's interest in Dali.

Inside a Crafts Writer's Mind


When I am stopped on the street or in a gallery and someone says they like the blog.  I usually ask them, "what do you most enjoy about it?" and the surprisingly consistent answer I have heard is that they enjoy seeing how my mind works.  So, I've decided to share with you an article that was written about my methods by Susan Gay Decker that first appeared Tuesday, August 2, 2011 in the Telegram.

By Susan Gay Decker
Special to the Telegram

Gloria Hickey, who was awarded the first ever Critical Eye Award for arts writing at the Excellence in Visual Arts (EVA) Awards May 27, says it was her father, a police officer in the Montreal vice squad, who first taught her how to look at things closely.

We'd be driving around and then stop at a set of lights and a man would walk in front of the car.  He'd ask, "What do you notice about him?" "He walks funny. Why does he walk funny? One leg is shorter than the other? And we'd peel away the layers like that until we could feel what he had in his pocket."

Her observational exercises with her dad were to be excellent training for her future career in arts writing and reviewing in which attention to details and their significance are paramount.

Hickey later built on her skills by studying journalism at Carleton, and then completing a master's degree in philosophy of art at the University of Toronto.

She now has been a professional arts writer and curator for 30 years and has published more than 250 articles in major newspapers, art magazines and books.  Sounding curiously similar to a detective, Hickey says that what gives her the most pleasure about arts writing is putting the pieces of a puzzle together.

She recalls working with Inuit artist Michael Massie when she was curating his 2006 exhibit, "Silver and Stone, the art of Michael Massie" at The Rooms Provincial Art Gallery. 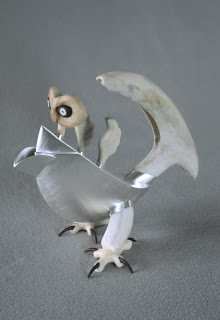 Hey Wait for Me, by Michael Massie.

When he told her that his favourite European artists were the surrealists, Hickey recognized the similarity between the surrealist interest in the subconscious and the way Inuit art draws on the dream world.

Researching further, she then found that surrealists had also expressed an interest in Inuit art and that noted painter Max Ernst had even been a collector.

Making these kinds of connections that enrich the meaning of the artist's work is really satisfying for Hickey.

"Artists don't always put the pieces together for themselves and so you're taking them by the hand and giving them a tour through their world," she says.

Hickey acknowledges that one of the challenges of writing about art is the responsibility to represent an artist's work appropriately. 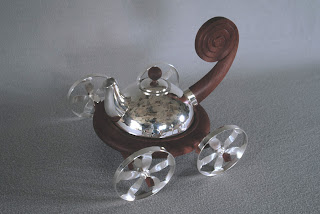 As an example, she describes a painting by a Newfoundland artist that depicts a moose carcass being carved up like a side of beef in someone's garage.

"I could say that's a Newfoundland version of a still life, or I can say it's a portrait of domestic violence, and what I choose to say about it really makes for a different relationship between the public and that work of art."

A new award for critical art writing, the Critical Eye Award, celebrates the best piece of critical writing about a Newfoundland and Labrador artist in any print or online publication worldwide.

Hickey won the award for her article on Newfoundland craftsman, Jason Holley, published in Fusion Magazine in its Winter 2010 issue.
Posted by gloria at 09:00

Email ThisBlogThis!Share to TwitterShare to FacebookShare to Pinterest
Labels: Inside a craft writer's mind