Coming Down After Halifax

Conceiving and delivering an exhibition is an intense experience.  I have been doing shows for a long time now and I still get an adrenalin rush.  It was only a few days ago that I was standing in the middle of Saint Mary's University Art Gallery and watching the Alexandra McCurdy retrospective show taking shape around me.  And I just kept thinking "I love my life!  This is so cool".

Before I left for Halifax I had sent an itemized list of what went on what plinth as I had worked it out for the previous venue, which was the originating instiution, the Burlington Arts Centre.  Saint Mary's was responsible for the catalogue, which turned out lovely.  The two venues are different in terms of floor plan, the display furniture they have on hand, and of course the lights.  No two galleries have exactly the same gear to work with, including staff, so you never know exactly what situation you are walking into. 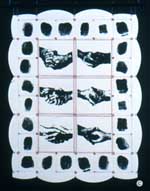 The Ties That Bind, porcelain quilt by Alexandra McCurdy (2000) it shows the hands of Alexandra, her mother and her daughter.  Around the border are fingerprints

Luckily for Alex and I, the crew at Saint Mary's were on top of their game.  The work was out of the boxes and in neat stacks on the set up tables all cocooned in bubblewrap.  The walls were freshly painted in the requested colours (believe me I don't take that for granted, I've seen spectacular errors in the past.)  The pedestals had been retouched and looked great.  Two of the staff were busy when I rolled in from the airport.  First impressions: Pam had the strongest forearms I've seen on a woman outside of the gym and Adam's owl tattoo charmed me from the outset.  Alex and I got involved unwrapping the work.  Things were going to be just fine.

And they were.  It is great when you can get everything done with enough time to relax a little before the opening reception.  Alex was naturally fretting about who would turn up but when all was said and done 110 visitors came and enjoyed the walk about.

But there was no time to let the adrenalin ebb away because the following day was the mini-symposium at NSCAD.  More smooth sailing.  How lucky can I get? 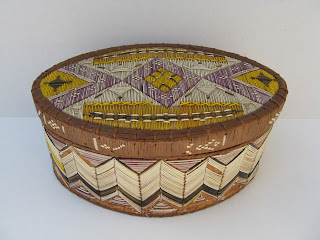 This is a traditional Mi'kmaq basket made of birch bark and porcupine quills, c. 1890, that is the show because it inspired Alex in her ceramic containers.  Ironically, it is the most valuable object in the exhibition.

Well back in St. John's it is time to pay the piper.  I have a draft of a book chapter due on an editor's desk for June 1st and well, let's just say, it is very far away from being complete. I can see months of rewriting ahead of me this summer. Send me positive energy!

This was the call I responded to:

Tchotchkes in the White Cube: Exhibiting Craft and Design in the 20th century

Conventional art institutions such as museums and galleries have had problematic relationships with three-dimensional utilitarian objects since their inception. As several scholars, including Ruth Phillips and James Clifford, have argued, conventional displays deprive objects of their functionality and turn them into highly anaesthetized fetishes of high culture. The notorious notion of the modernist white cube has often been challenged and debunked by craft and design practitioners as unsuitable and denigrating for exhibiting utilitarian objects. The present collection of essays seeks to address the problematic relationship and possible solutions of the conventional exhibition strategies which may include participatory happenings or alternative exhibiting venues. Submissions which deal with less conventional methods of display in such venues as craft fairs, commercial galleries, department stores, artists’ studios, and life demonstrations are highly welcome. This collection will try to analyse the following ideas and questions: how craft and design displays contributed to the rethinking of the notional white cube and have helped to come up with alternative strategies for display and public engagement; how touch and texture are two of the most pivotal issues of the production of craft objects; how tactile experiences have been conveyed in different situations and venues, for examples those which have  or have not included the opportunity to touch the objects. How have the performative aspects of craft and design production help to attract audiences to museums and exhibitions? How have the relationships between artists and curators changed through the twentieth century, and why? What are the many roles of the media in the display of the craft and design products?
Original previously unpublished contributions of between 5,000 and 7,000 words including footnotes and bibliography are welcome, as well as interviews with craft practitioners and curators. The latter should be between 4,000 and 6,000 words. 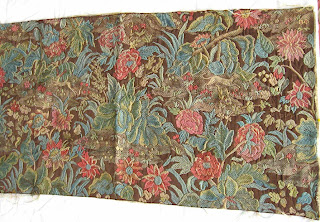 Alexandra's mum was a textile designer for Lee Fabrics in England.  This is a sample of her work.  Patricia Brock was also a painter and Alex's first role model as an artist.  The show is called The Fabric of Clay Alexandra McCurdy and explores the relationship between textiles and ceramics.