Falling Down the Rabbit Hole of Indigeneity 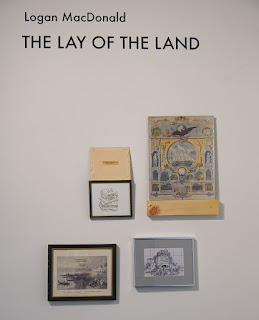 One of my projects this past week has been writing a review of Logan MacDonald's Lay of the Land for C magazine.  It would be unprofessional for me to share what is in that article of a 1,000 words before publication but I would like to share some thoughts about the reviewing process in general and Indigenous Art in specific.

In terms of a review, timing is crucial.  Publications have schedules that must be maintained whether they are a daily newspaper, a monthly magazine or a quarterly journal.  So, the first hurdle to clear is whether a show dovetails with the publishing cycle.  After that, it helps if someone–other than the artist and their mother– is interested.  Personally, I gravitate towards shows that have themes that I want to think about, something for me to sink my teeth into, as a writer.  I check out any number of shows but recommend a small handful to publications for review.  As a rule of thumb, if there is the potential for a negative review I usually decline but offer to talk with the artist face to face.  This way we hopefully both learn something.

And then there is the issue of whether I am qualified to offer a useful commentary on the show.  I have written about Indigenous Art since the early nineties but have stepped away from the topic for several years.  The reason was that I wanted to encourage indigenous writers and curators to fill that role.  There has been a huge ground swell in scholarship on the topic and the issue of indigenous identity is highly contested.  I have stayed abreast of the production of Indigenous Art but I cannot claim to be fluent in the lingo and its subtle nuances.  I am dating myself (deliberately) when I say that I can remember when the term First Peoples was introduced to art history.  All I can do is to promise to keep learning.

One of the terms that intrigued me in Logan MacDonald's lexicon was that he identifies as a queer visual artist with settler/Mi'kmaq ancestry.  What I've seen in the community is the evolution from European ancestry to settler ancestry.  Given the politics of colonialism, more neutral terms are falling away.


Terms are also getting more precise.  The novelist Joseph Boyden made Maclean's, the Globe & Mail and CBC not for his excellent writing but for the charge that he was misrepresenting his indigenous ancestry. "While the majority of my blood comes from Europe and the Celtic region," Boyden said in a statement to APTN, "there is Nipmuc ancestry on my father's side, and Ojibwe ancestry on my mother's [sic]."  But that wasn't enough to satisfy his critics. Boyden apologized to the Métis of Red River because he had supposedly referred to himself as Métis.  Even in recent memory, Métis was an acceptable term to convey someone of settler and indigenous ancestry.  But it seems that is like confusing sparkling wine for Champagne. http://www.cbc.ca/radio/asithappens/as-it-happens-wednesday-edition-1.3914159/joseph-boyden-must-take-responsibility-for-misrepresenting-heritage-says-indigenous-writer-1.3907253
APTN has gone so far as to call Joseph Boyden a shapeshifter.  All I'm qualified to say is that Boyden writes good fiction and I am grateful to MacDonald's art for introducing me to it.
Posted by gloria at 12:49