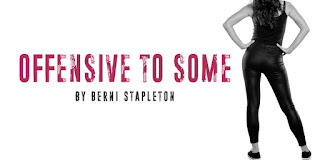 Dark and bruisingly intense, Offensive To Some ran from December 7 to 9 at The Gathering Place Theatre.  It was a stark contrast to the ho-ho feel-good Christmas fare on offer at so many other venues in St. John's, but it couldn't have run at a more appropriate time in the calendar.  December 6 is the National Day of Remembrance and Action on Violence Against Women.  I still remember December 6, 1989 as the mind-numbing day of the Ecole Polytechnique Massacre when 14 women were murdered and 10 women and four men were wounded in Montreal by a single gunman.

Offensive To Some is a one-woman tour de force written by Berni Stapleton, some 22 years ago.  It is about an abused wife in rural Newfoundland who takes her "domestic situation"–as the police dismissively term it– into her own hands and kills her tortuous husband.  This production is skillfully directed by Ruth Lawrence and stars Miranda MacDonald, whose energy flooded every square inch of the spare stage during the 75-minute performance.  Insightful music selections, from local artists like Ritual Frames (a.k.a Daze Jeffries), edged the production from current to fresh. 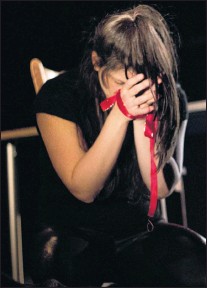 The action of the play takes place in a police interrogation room simply evoked by a table and a pair of chairs.  This distraction-free setting serves as a focus point for the audience's attention and is an antithesis of the overly designed sets that often compete with the actors in some theatre confections. There is a feeling of entrapment, which includes the audience, as we sense the predetermination of the abused wife's fate.  Even before her incarceration her freedoms were limited to smoking and TV talk shows. The same potency is found in the use of props, such as the red trim of the blanket, which MacDonald rips off to transform it into a militant headband, handcuffs and other more tragic alternatives.  It was a telling metaphor for the desperation, anger and resourcefulness of the heroine.

Offensive To Some was presented by PerSIStence Theatre Company, which is dedicated to the belief in the political, economic, personal and social equality for all those who identify as women.

http://www.persistencetheatre.com/
Posted by gloria at 09:25