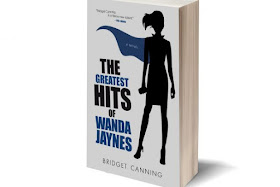 It has been a great fall season for novels–and actually books of all kinds–featuring the talent of Newfoundland and Labrador.  Sumptuous art books by Pedlar Press like Stan Dragland's Gerald Squires, fresh-faced collections of short stories like Eva Crocker's Barrelling Forward, and let's not forget the latest entries by novelists Craig Francis Power and Joel Thomas Hynes, who both continue in their own special strain of Newfoundland noir.  However, if I had to pick a book to give a friend for Christmas it would be Bridget Canning's The Greatest Hits of Wanda Jaynes.  Described by Lisa Moore as a "fierce new talent" Bridget Canning has crafted a novel with emotional grit, just enough anxiety and a fast paced plot that keeps you turning pages.  If you want something to balance out the grimness of the economy and the evening news, Bridget Canning delivers.

What follows is an excerpt from a Q&A with Bridget Canning about her much anticipated debut novel.

GH:  You have a gift for setting up two worlds at once: the external world of the school, cast of characters, etc but almost seamlessly you introduce Wanda's internal world.

BC:  Thank you! It was important for me to reflect the different roles Wanda occupies and how they are all affected by the shooting and her reaction. Wanda’s an educator as I am, and I believe for most educators, there is a heightened awareness of how one is perceived professionally versus one’s actual private life and it can create a real feeling of vulnerability. So I wanted Wanda’s internal and external worlds to reflect her efforts: behaving professionally, protecting her private life, being sensible with social media. And of course, all these things become infected.


GH:  I found Wanda Jaynes to be a very sympathetic character.  I cared about her almost immediately.  How much of Bridget Canning is there in Wanda Jaynes?

BC:  Wanda and I share the same career situation and she embodies many places I’ve been emotionally over the years, but she acts and thinks in ways very removed from me. She’s made of much more bottled misanthropy than I am. I tend to identify more with Ivan – we both enjoy ranting as entertainment way too much.


GH:  The combination of being bright, funny and very sensitive, combined with the series of misadventures made me think of Wanda in the light of another Bridget – Bridget Jones.

BC:  I love Bridget Jones, so I happily accept this compliment. Interesting to consider both Bridget Jones and Wanda Jaynes together; they both indulge in their vices for their own pleasure and escapism, although in Wanda’s case, it morphs into a crutch for how she deals with trauma. And they both share the same analytical observations of societal pressures and relationship dynamics. I’d like to think they’d get along. They’d go for a pint at least.


GH:  Will there be another Wanda Jaynes book? 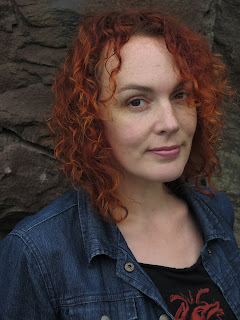 BC:  I don’t plan on writing another novel about Wanda, but if I was going to revisit the story, I’d like to explore it from another character’s perspective, like Frances Rumstead or Geraldine Harvey. However, I enjoy the idea of unlikely heroes and have just finished a first draft of a novella about an unlikely villain.


GH:  I really liked the organization of your novel.  You've got great pacing and it makes for a real page-turner.  Can you comment on this?

BC:  I did the WANL Writing Mentorship a couple of years ago for a different manuscript and one of the best pieces of advice Ed Kavanagh gave me was everything in your novel should be working to forward the plot. He also suggested drawing out the story – creating a visual to sort out all the character/plot/organizational threads. I do this with everything I write now; first slogging out the first draft and then drawing the storylines to consider ways to fuse action and nuance together.


GH:  I gather that you had another version of this book in 2015 under the title, Impulse.  Just judging by the titles –The Greatest Hits of Wanda Jaynes and Impulse– these sound like two very different books.  I am curious to know how one evolved into the other.

BC:  Funny, the title was actually The Right Impulse and when it received an honourable mention with the H. R (Bill) Percy Novel Prize, they called it Impulse in error and I didn’t bother correcting them as I knew I was going to change the title. And that title was an update from Hero Inaction, which I originally thought was clever, but no, it’s awful. The Right Impulse was a step towards the idea of heroism as a knee-jerk reaction and playing with Wanda’s good and bad impulses.
The early version of the novel contained the same plot, but through revisions, I focused more on developing other characters. It was important to me that the impact of the shooting be felt by everyone in St. John’s – because it would be. We’re a large town more than a city. So while things are happening to Wanda, I wanted the awareness that everyone else’s wheels are also churning through this shared experience. Hopefully that comes through.


GH:  I wasn't surprised to learn that you have an interest in writing for the screen.  There was something very cinematographic about The Greatest Hits of WJ.  Your next project Water From Stones will be a screenplay, is that correct?

BC:  I actually have a draft of the screenplay written and have signed a workshopping agreement with a Canadian production company as we’re putting together a pitch book. So fingers crossed there.
gloria at 11:31
Share