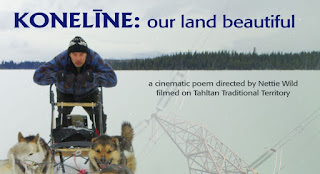 I never plan it, but it seems as if themes emerge from the events in my daily life.  A day after it was supposed to start, I heard that there was a weeklong conference at Memorial University called Aboriginal People's Week (March 20-24).  I regret missing Chief Mi'sel Joe's information session on the Beothuk but I did snag the Newfoundland premier of Koneline: our land beautiful, which is a documentary about the development of the Red Chris Mine in northern British Columbia.

What I appreciated about this award-winning documentary (most recently Hot Docs 2016 Best Canadian Feature Documentary) was not just the stunning imagery–imagine a herd of horses swimming across a swollen, rushing river amid the B.C. mountains–but its nuanced account of the impact of mining, especially upon the Tahlton First Nation.  There was a multiplicity of perspectives represented and I was struck by the contrast between generations.  At the risk of over-simplification, I will point to the example of the young family man in the hard hat and a tribe elder who could have easily been his grandfather.  While the elder laments the dwindling wild life that he can hunt, the heavy equipment operator says that he enjoys working outdoors, being able to provide for a growing family and that he doesn't have to move away.  I also enjoyed watching the Tahlton phd student trying to document his native language before his father passes.  And in a surprising turn of events, the student ends up with a dog team and sled–a major commitment that makes returning to university difficult.

For years, I've been following the growing contemporary First Nations music scene with artists like Tanya Tagaq and groups like A Tribe Called Red starting with Electric Pow Wow.  My latest CD purchase was ATCR's Nation II Nation, which fuses electronic dance music, hip-hop, dancehall and traditional Native American singing and drumming.  There is something very primal captured in the music by these DJs from Cayuga First Nations and Ojibway, Nipissing First Nations.

Finally, on March 31st, I attended Eastern Edge Gallery's closing reception for the exhibition Mi'kMaq Word of the Day 2.0 by Jordan Bennett and Ursula Johnson.  Jordan was present and Ursula was Skyped in.  For the duration of the show, new words were painted onto the gallery walls as Ursula coached Jordan to learn his native Mi'kMaq.  It was performance art with a cultural impact.  I've been aware of both of these intriguing artists for a long while but since Jordan Bennett's involvement in Earthline, our first school of indigenous tattooing, he has worked his way to the top of my priority list.

The National Gallery in Ottawa has been overhauling its galleries to establish more of a dialogue between its indigenous collections and its European collections.  The Juno Awards this past weekend also featured a strong First People's representation that was multi-generational.  It's my hope that the ghetto walls are coming down and the contribution of First Nation artists will no longer be confined to a category.
Posted by gloria at 10:51