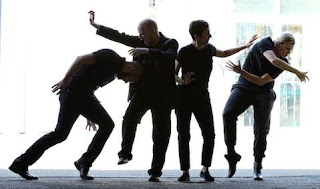 Joe Ink.'s performance of 4OUR admirably accomplished its goal of expressing the "intriguing paradox that as we mature into the height of our artistic abilities, our bodies begin a slow deterioration, leaving our emotional lives and memories more vivid and potent than ever."

In addition was the consistent, palpable and poetic sense of relationship on stage.  From the opening notes of Bach, with the curling, Baroque-like hand gestures and undulating, interlaced limbs to the conclusion of snowflake- decorated deterioration there was always the impressive partnering and ensemble movement.  4OUR progresses through a story arch of youth, adulthood and demise.  It captures, and is connected, by the relationships of protection, influence and especially at the end–support that is so ably expressed by Giaconda Barbuto, Heather Dotto, Jarrett Siddall and Joe Laughlin.  More than one audience member shed tears during this evocative performance.

Many in the audience murmured about the stagecraft and the versatile use of sheer white garments and the cornucopia like vessel.  A single garment traversed from baptism or birth, wedding to funeral shroud while the vessel expressed fertility, protection as armour and blinding mask.  You can always count on Joe Ink. To exploit costume as prop– textiles are indeed our second skin and augment movement.

4OUR is more than a simple narrative in dance.  Each of the four dancers has significant solos, almost like movements in a musical composition, each with their own distinctive visual signature.  The music itself ranged from the classical to modern and was downright intoxicating.  There was also comic relief as in the episode of the chambermaid and the bellhop with its staccato antics reminiscent of black and white silent film. 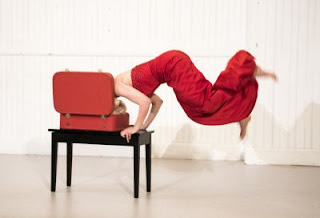 The following evening, Sara Porter performed Sara Does A Solo, which also addressed the theme of "becoming a mature artist–with all the richness and the loss."  It was in the vein of docu-dance, where spoken word, stagecraft and dance movement marry.

Porter started with the present and stepped back into her childhood.  She took us from her being a "tense verb" (of course she'd be an action word) to her first encounter of music, through motherhood and a rich fantasy life of glamorous gowns red high heels and a matching ukulele.  She glided, slunk like a cat, lumbered like a beast of burden but expressed the most painful truths with awkward self-depreciating movements. Presented before an audience amicably dominated by professional dancers, many of themselves approaching middle age, her memoir on stage was received sympathetically.

Email ThisBlogThis!Share to TwitterShare to FacebookShare to Pinterest
Labels: Festival of New Dance 2016