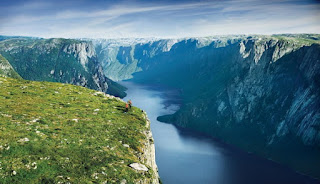 On Wednesday morning bright and early I boarded a chartered bus from St. John's to Gros Morne National Park.  I felt like a kid off on a field trip; there were lots of friends on the bus and excitement was high.  The only drawback was that Wednesday was also the day of Industry Panels and moderated discussions but I had committed to taking the conference bus and so if I wanted a panel it was going to be on wheels.

This is how the Industry Day was described in the brochure, "Spend a day with visionaries from around the world who are capitalizing on the potential of handcrafted work to create successful global businesses.  Come and be invigorated by ideas of what is possible!"  Talking to those who did participate it seems that the day delivered on those lofty goals.  (As an aside, wouldn't you like to have a business card that says, "visionary"?  Personally, I'll settle for "catalyst".  I do know someone whose card says "Renegade".)

On Thursday we got to do studio and shop tours in the vicinity.  For me, it was an opportunity to meet some crafters I had interviewed years ago but never met in person - like Joan Payne of Hunky Dory in Woody Point, which is noted for its use of recycled lobster pots for representational folk art images.  Certainly Urve Manual's new place The Glass Station, close to the main drag in Rocky Harbour, was a standout (I even persuaded the bus driver to come in to that one to admire Urve's sparkling creations). 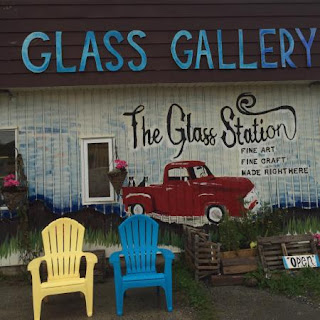 But my favourite memory of the Thursday self-guided tours was when we found ourselves locked out of the Surface Design Association's Canadian members exhibit at a local drinking establishment.  Not willing to take no for an answer, one of my friends takes off for the post office across the street to see if they know the owner, meanwhile another of us starts working the phone.  Sure enough, within ten minutes a kind-hearted man runs up to the door as if it were third base, dust flying off his shoes.  Presto we got in and made a new friend in the process.  Oh yes, and the show was worth the hassle.  The remaining 13 members of our group that day were grateful that we were so hard headed.

Thursday evening at The Fisherman's Landing Inn was our official meet and greet and when I realized how large the conference actually was.  All told there were approximately 200 participants – including 14 instructors who came from as far away as East Pakistan.  The participants would break down into small groups of ten or less for hands on workshops that would included fibre techniques such as embroidery, spinning, felting, tapestry weaving and basket making.  I audited a paper making workshop, net knitting (as in fishing net) and colour design in garment knitting.  These were daylong or more sessions punctuated by lunches fit for a holiday banquet.  Ladies in the community came in and put on home cooked spreads that included moose stew, turkey, roast meat, macaroni and green salads and pies from the local berries.  You could taste the love!  We would waddle outside at break times and admire the autumn colours as we were smack dab in the middle of Gros Morne Park.  The only thing more you could have asked for was time.  It was all going by too fast.

You could work off your lunch with a hike guided by Parks staff that were geologists and biologists.  There were three hikes offered.  I did the Stroll Through the Strata in Green Point.  During the evening there were artist presentations, films, a dance, plus more food and yet more partying.  Two of my favourite diversions were the button or brooch exchange and a performance by singer Anita Best. When my little fabric and copper brooch (made during a design workshop back in the U.K.) was exchanged for a sealskin blossom made by Barry Buckle I felt like I had scored big (Barry also regaled me with stories of what it was like working for fashionista Anne Klein).  I am not given to retail therapy but I did breakdown and buy some mitts during the pop-up sale.

Sunday was the concluding day of the conference and delegates rushed to finish their projects.  The evening closing party at The Woody Point Discovery Centre was also the closing party for Wild, Pure Aesthetic Wonder, the exhibition that Philippa Jones and I co-curated.  Time for those wooly whales to swim home as Gayle Tapper played her magic harp.