One of the ideas that I have been struggling with over the past several months is the notion of originality.  I have had no less than four art teachers lament to me that their students either don't understand the concept at all or that they are "knocking off" the teachers' art once they graduate and establish independent practices.   These laments come to me from a variety of provinces within Canada and in one case the United States.

As long as our arts and culture in North America puts a premium on originality I think this lament will persist.  Students imitate teachers–full stop; it is a fact of life.  As a matter of fact, I used to be able to identify with whom an emerging artist studied with at a quick glance.  It is usually that obvious to a trained observer.  For a long time, it was also (I believe) the basis for regionalism.  There was a characteristic way of working with certain materials and a certain choice in subject matter that was identifiable.  Take ceramics: earthenware and majolica were associated with Walter Ostrom and consequently his graduates from the(n) Nova Scotia College of Art and Design.  That went on for decades. Let's go to the opposite end of the country to British Columbia.  When I met Sadashi Inuzuka in Toronto it was clear from his sculptural practice that he had studied or worked with Sally Michener, who was teaching at the Emily Carr Institute.  The mark of Jun Kaneko was also very clear in Inuzuka's taste for the large scale and geometric patterns.

“Originality is nothing but judicious imitation.”
– Voltaire

Now, who owns something like a geometric pattern?  It is literally everywhere and every century that we humans are aware of has oodles of objects decorated or marked with a geometric pattern.  My mind jumps to this because when Inuzuka did a residency in Australia aboriginal potters asked him why he was imitating their pottery.  In fact, Inuzuka was originally exposed to geometric pattern while studying ancient Japanese art.  My own fascination with geometric pattern has lead me to study aboriginal art here in Canada and south of the border on various Navaho reservations.

Various techniques come and go out of fashion.  For a few years, encaustic was big and now drawing in ink is on the upswing.  An artist goes away to a residency or workshop, picks up a new technique and brings it back home.  He or she shows it off like a new toy and of course everyone wants to play with it.

On the other end of the spectrum, an artist can labour away in isolation, problem solve, trouble shoot and perfect something they regard uniquely theirs only to discover another artist proudly showing art that is very similar.  The road of discovery was entirely theirs but the end result doesn't necessarily broadcast that.  Viewers are going to come at it with an entirely different context.  What should the artist do?

I regard technique or things like geometric pattern or a specific motif as a language.  It can be used in various ways with accents, inflections, a variety of contexts etc. The point to me is: are you saying the same thing as everyone else speaking that language?  Are you saying something different?  What are you contributing to the conversation?  I can think of several artists who use aprons as a raw material, a hand-full who use chain mail, dozens that work with dolls, etc.  You don't have to say something entirely new.  It can be enough to shed insight, point out the overlooked, or encourage me to think differently about something that has existed for a long while.  This is not exclusively about the novel.

Nobody would want to speak a language that could not be used to communicate with others.  It needs recognizable elements that are shared.  If art is about expressing something, if it is a form of communication like a language it can't be entirely original. 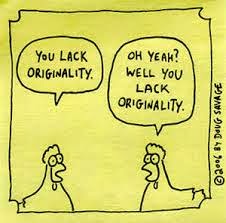 Email ThisBlogThis!Share to TwitterShare to FacebookShare to Pinterest
Labels: originality versus novelty