Marlene Creates Makes Art in Tune with the Times


I have always been a fan of Marlene Creates' art, whatever form it takes.  Pristine photographs of grass shaped by her sleeping body, texts in the landscape, and maps drawn by others were some of the things I came to associate with her.  But whatever the form, the style was consistent:  disciplined, thoughtful, relevant and usually associated with a sense of place.

The landscape dominates visual art in Newfoundland and Labrador.  That is true both historically and in more contemporary manifestations.  I believe that landscape art boils down to a visual representation of the relationship the artist has with a place.  Perspective is one of the things I like to watch for.  Panoramic vistas, arm's length, or in your face intimacy are just some of the ways artists choose to represent what they are looking at –and most importantly–experiencing.  That's what I think is being shared: the experience of place.

Last week I made a visit out to Blast Hole Pond Road in Pourtugal Cove to experience, along with a band of about 25 folks, one of Marlene Creates' evening adventures in the Boreal Forest.  That evening Rob Power, something of a local percussion hero, was the featured musician.  I said later to a friend, "If I was sentimental, I would have described it as magical".  As it is I am a more analytical type but a hedonist nonetheless, so it was near perfect. 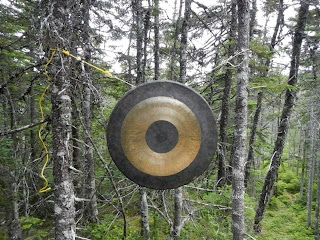 What a visual!  A gong in the Boreal Forest.

Marlene took us through the woods, stopping at key spots and sharing poetry that she had written about the location that inspired the words.  We were treated to the delights of Newfoundland dialect, winged creatures and much more.  Rob improvised musical responses from a series of instruments that appeared from the depths of his bag of wonders.  One encounter that was evidently a hit with all of us was his playing a riff on the arch of a bridge while he teetered over the Blast Hole Pond River.  The slats in the wood bridge became a xylophone accompanied by the wash of water and wind.  And another standout was the big gong suspended from supple spruce trees that bent in response.  When the last note finished vibrating we stood in receptive silence listening to the swoosh through the swaying boughs.  "This is why we need music," I observed out loud.  The evening concluded with a Rob Power concert in the garage and treats shared around a bonfire.

I knew text had frequently played a part in Marlene Creates' images but I was curious why she had made the leap to an experience shared with an audience from an object that you hung on a gallery wall.  Marlene explained that she had been hand-writing her short poems on card stock and installing them temporarily in situ to photograph.  But some of her poems became too long for that, so she decided to invite people to the site to take them on a walk and read them the poems out loud.  I think this is an especially sensitive choice in a day and age when we are choked with so much stuff and senseless distraction.  Here we had been given the distilled essence of something. It is a decision that we participants all seemed to be grateful for.

Check it out:  Marlene's website.http://www.marlenecreates.ca/bio.html

Email ThisBlogThis!Share to TwitterShare to FacebookShare to Pinterest
Labels: From object to experience