Diana Dabinett's vibrant paintings inspired by her residency in Costa Rica in 2010.

It was a delightful Monday afternoon surprise to discover the Christina Parker Gallery open at its new location on 50 Water Street.  The space is bright and airy even on a foggy afternoon and overlooks the St. John's Harbour, which is no doubt an added bonus to tourists discovering the city's charms.

What struck me as I walked the length of the gallery and taking in the varied art on the wall and pedestals was the sense of growth and maturation that several of our local artists have acquired.  For example, I have always been a fan of Peter Drysdale's quirky sculpture composed of found objects.  But the works that were on display showed a new sense of resolution and design sophistication that I would not have associated with his earlier work.  The over-busy quality was gone and it was like the static on a radio channel had disappeared and the words were coming across clearly.

Dianna Dabinett's paintings of tropical flowers were also impressive.  The smaller scale came across as more focused than the previous larger scale works, especially those on silk or mixed media.  This was Dabinett doing what she does best: making us fall in love with the sensuous beauty of nature.  The brighter colours and compositions in the horizontal format were irresistible. 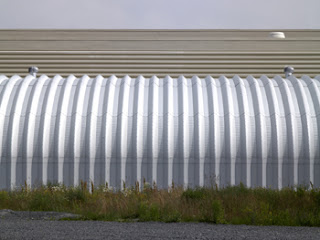 Ned Pratt's Landline series of photographs earned him a solid place in the Pratt dynasty.

Ned Pratt's photos from the Landline series and Kim Greeley's landscape paintings made an intriguing but probably unintentional pairing.  The whole notion of the human presence in the landscape, whether by farm structures (Pratt) or the yellow striped highway (Greeley) is tackled with dramatic subtlety and contemporary flair.  They both have the potential of developing renditions of our landscape that are truly iconic rather than cliché.  Pratt seems to have found his voice with this Landline series.

In terms of new names (at least new to me), Michael Fantuz, caught my attention.  In particular I was taken with his large (40" x 40") black and white oils interpreting the abandoned communities near Burgeo.  I preferred them over the coloured landscapes which seemed more overtly picturesque.  The black and white paintings seemed more dramatic but less sentimental.  And even though very large they didn't seem inflated.  The large scale seemed to invite viewers to step inside and enter a world apart from the gallery.  They had authority and expressiveness.  It did my heart good to note several red "sold" stickers on both the brightly coloured and more austere black and white paintings.