I am very grateful to have had the opportunity to visit the 2012 SOFA Chicago show with its stunning array of fine craft from across the States, Canada and Europe.  This is an event I have wanted to experience during my entire professional life as a craft curator and writer.  It was most illuminating to be able to attend this 19th annual SOFA during these difficult financial times to see how our American colleagues are dealing with their challenges.  I was pleasantly surprised to discover how people–artists, dealers and collectors–welcomed the opportunity to share their experience.  See my comments for Friday and Saturday for some of their remarks.

October 31st was a travel day
This is the first time I have flown Porter to the U.S.A.  A word of caution, neither the travel agent, nor I appreciated that this would not be a direct flight but although no plane changes were required it was a milk run, with stops in Ottawa and Halifax between St. John's and Toronto that would eat up six hours.  On the plus side, Porter uses the Billy Bishop airport in Toronto and the Midway airport in Chicago.  Midway is a smaller, quieter airport that is significantly closer to downtown Chicago than O'Hare and thus a cheaper taxi ride.

November 1, 2012
This day was spent in the workshops presented by the Craft Alliance and the very capable Bernie Burton.  Here is a break down of the 2012 participants: 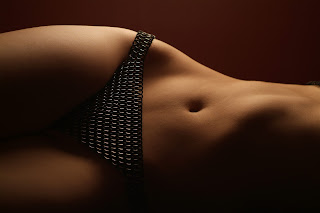 A sensational bikini bottom by Jason Holley.  In my talk I examined the influence of his metal work on his ceramic work.

15 people participating in this mission; 10 craftspeople (2 from Newfoundland & Labrador; 2 from New Brunswick; 1 from Prince Edward Island; 5 from Nova Scotia; 5 observers from Atlantic Canada craft organizations.)  Everyone took advantage of being in the same hotel and would meet daily at breakfast to talk shop, network and share images.  I was able to make suggestions for potential contacts at galleries and publications in Canada and abroad and to share my own experience with the craftspeople.

This is the line-up of speakers and workshop topics.  In each I collected handouts and made my own detailed notes.  Below, I have included a short highlight from each workshop session:

Immigration Law, Anna Morzy Fragomen, Del Rey, Bersen & Lowey LLP
Anna Morzy strongly recommended that if your stay in the U.S.–during which you cannot process any sales of your work– was less than six months it is not worth applying for a visitor's visa.  It can cost up to $5,000 and require the support services of a lawyer.

Getting Your Work Across the Border, David Michalek, of AN Deringer Inc.  If your work comes in for exhibition purposes it must leave the country as such too –sales must be from Canada; "fine art" cannot be in multiples exceeding twelve and travels across the border duty-free.

Canadian Consulate, Ann Rosen, Ann cautioned against entering the U.S. market through the larger cities and recommended that smaller cities afforded less competition but still had many opportunities.  Look for cities with universities and a diversity of industry such as Wisconsin or Madison County.

Working with Galleries, Rick Snyderman, Snyderman-Works Gallery
Snyderman suggested that the art market in the U.S. had two years still to work out the financial consequences of the downturn and that during that time it would not be conducive, due to the extra cost and labour associated, to bring Canadian work across the border for sale.  Although he felt positive about Canadian art he said it had no profile in the U.S. and that if pressed he could not name any of the top makers.

Legalities in the Arts, William Rattner, Lawyers for the Creative Arts
Be the one who decides what happens to your art inventory, copyright and intellectual property (including e-passwords & info.) in the event of your death.  A collector may own your work but not the copyright; don’t assume your family wants your collected works or the job of dealing with it.

The Gallery Scene, Ann Nathan, Ann Nathan Gallery
Despite being in business for decades Ann maintained that things have not changed: "collectors still want great stuff and artists still want great notoriety".  She felt that artists' expectations were too high in terms of sales and has cut back on openings, advertising and instead focused on collaborative ventures with other galleries and now takes work from Spain and Portugal. 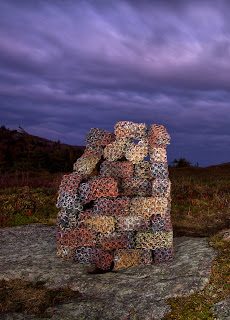 I hope that one day Jason Holley finds a way to adapt his sculpture for outdoor installation work.  As this photo demonstrates, his work makes a dramatic impact in nature.

Thursday evening was the SOFA Gala during which the excitement was palpable amongst the well-heeled crowd.  When I noticed that some of the dealers were buying from each other, one of them shared with me that this was a tradition for many of them and that they enjoyed acquiring a piece each year for their personal collections.

Friday, November 2nd and Saturday, November 3rd was spent touring the show of the work of over 800 artists.  I was struck by the presence of collectors' groups (for example I talked with one group from Arizona) and in the special exhibits that they mounted (see list below).  SOFA Chicago has always been associated with studio glass, and this year was no exception, but jewelry and wood also received special exhibit attention.  Several of the gallerists mentioned to me that jewelry was especially popular and was easy for them to travel with and display. There was unsubstantiated talk that the Sante Fe SOFA show that has folded (the NY show also folded after its rental costs tripled) would be replaced by a jewelry show.

The Society of North American Goldsmiths (SNAG) was in full force and its focus was leading up to the 2013 Toronto joint conference of U.S. and Canadian jewellers and metalsmiths.  Some groups, like the Society for Art Glass, also held board meetings in adjacent rooms.  I spoke with the President of the glass group and she said her main challenge was securing younger members for the board, a reoccurring issue with several groups.  (Ironically, her husband was the volunteer sound tech for my lecture so we got to talk about the rising prices of fine craft making continued collecting a real challenge to those whose incomes have not risen accordingly over the decades.)

I also broke my time up on the floor of booths by attending lectures - for example Paul McClure's lecture- and presenting my own talk on Jason Holley.  Anne Meszko, the Director of Educational Programming at SOFA expressed special interest in my lecture saying that they got few proposals from critics and curators and asked that I stay in touch.  The audience of fair and lecture goers was augmented by busloads of students, ranging from highschool to post graduate students in Fine Art programs from neigbouring cities and states.

Special Exhibits: Among Fellows: An exhibition of work by the 2012 college of fellows or masters of the American Craft Council; What is Beautiful? Changing Perspectives in Contemporary Wood Art- presented by the Collectors of Wood Art, Corning Museum of Glass; Eye of Mr. I: A Tribute presented by Intuit: the Center for Intuitive and Outsider Art; Gothic Jewelry: Sinister Pleasures - Metalsmith's 2012 curated exhibition presented by SNAG.  There were also glass and mosaic demonstrations.  Chubb Personal Insurance was the special corporate sponsor and Collectify a new software company specializing in inventory software for collectors was also active with a booth.  I purchased and collected catalogues to share with Craft Council members.

In total: 12 areas were set up for special exhibits and related booths including special-interest groups such as NCECA or publications like Ceramic Arts & Perception.

Speaking with long-time participants I learned that this was the smallest SOFA Chicago show ever with 64 galleries and 7 solo artist features participating.  However, by the end of Saturday many of the top galleries, such as Snyderman's, unofficially reported good sales and new galleries like L.A. Pai, which participated for the first time, received much attention.  Mid-range galleries said they at least broke even and felt the fair was a success.  Elena Lee galerie and Barbara Silverberg's Option Art were repeat participants with with busy booths. Barbara said that her sales at the SOFA were on average in excess of what she could sell in six months in Montreal.

I was able to attend a special brunch event hosted by the James Renwick Alliance, an independent national nonprofit organization that celebrates the achievements of America's craft artists and fosters scholarship, education and public appreciation of craft art. The Alliance is the exclusive support group of the Renwick Gallery of the Smithsonian American Art Museum, the showcase of contemporary American craft. In November, the Renwick is hosting a critical thinking conference about post-disciplinary craft, which also was the topic of my SOFA lecture.

At the Renwick brunch event, I was also able to make contact with support groups that mirror our Canadian non-profit groups.  Given our growing list of natural disasters and the lack of insurance carried by many craftspeople, I brought back Studio Protector an artist's guide to emergencies.  Their disaster readiness and response resource should be of special interest to those in our industry.