Coming into her own –Reed Weir's Horizon Watchers 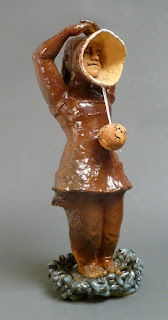 Earth Day Performance by Reed Weir.  The unusual hood the figure wears suggests our tunnel vision regarding the environmental and ecological challenges we face.


Reed Weir has a new solo show that will open this week (June 15th) at the Mary E. Black Gallery in Halifax, Nova Scotia.  I had the pleasure of working with Reed on the essay for this exhibition.  And I think it is an important one for Reed in terms of the evolution of her own career.

I have watched Reed evolve as an artist over the past decade and it has always been interesting.  She is largely self-taught as a sculptor and ceramic artist.  Her training at OCAD is in painting.  Reed is also the daughter of two professional artists and married to a potter, Brian Banfield.  They are a study in opposites.  Anyhow, Reed has systematically grown as a sculptor– solving technical issues, developing a distinctive style and finding her expressive voice. 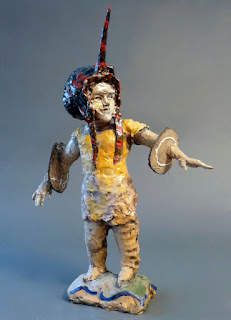 Douter by Reed Weir.  I like the shields as theatrical props.

Reed's strength as a sculptor has been that although she drew her subject matter from her immediate experience, she managed to find something to say that was of interest to everyone.  In other words, finding the universal in the regional.  And that is loud and clear in this solo show.  Here's the introductory paragraph from my essay,

We are all Horizon Watchers, scanning the horizon line, watching, waiting, and assessing our options.  For some of us, there are storm clouds on the horizon.  For others, there are clear skies.  Some of us watch the horizon anxiously, while others watch with quiet confidence.  The horizon line is something everyone on planet Earth shares.  It is a common denominator like the human condition.

When Reed told me the title of the show my mind immediately jumped to the role that watching the horizon has played in everyday life here in Newfoundland in terms of living on the ocean and our quixotic weather but also how much Newfoundland is going through changes in terms of its development and economy.  Reed had mentioned in passing how much her community of Robinsons is changing.  Workers are coming from as far away as Jamaica to work on the local dairy farm.  We see the same trend in other parts of the province.  The only thing we can be sure of is change.  But Reed clearly steered me away from that discussion. 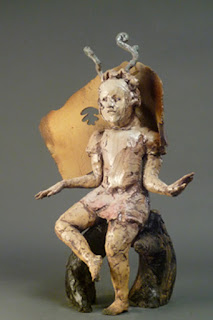 Falling Leaves by Reed Weir.  I think this body of work shows a new confidence in Reed as a ceramist.

Her horizon watchers are performance artists, part protesters concerned about environmental issues, as in Earth Day and part Lady Gaga wearing monster hats and striking a pose.  It makes for some arresting visual imagery.  And I really like how she resolved the issue of surface in this body of work too.  There's a lot less colour in this body of work than in past groups.  And the glazing is much more mature and less distracting.  I found it interesting that all her decals are handmade.  This show marks a new level of confidence in ceramics for Reed.  And she'd probably share that opinion.  She deserves a toast, "Well done, Reed Weir, well done!"